How can you become more accurate with photo geolocation? Finding a country is good, finding a town is better, finding a street in a town is better still – but is it possible to get even more accurate than that? It depends on the needs of your case, but if you want to geolocate and investigate something as specific as an airstrike on a mosque or where exactly a murder took place then being precise is really important. Unless you’re lucky enough to come across an image on social media that still contains EXIF data, then one of best ways to add extra granularity to a geolocation search is by increasing the amount of data available to use as a reference. This is easier to say than to do of course, and it is hardly controversial to say that multiple sources are better than one, but the type and quality of these sources can really make a difference to how accurate geolocation can be.

To illustrate the point I’m going to use Ruaridh Arrow’s recent photo challenge from 10th February this year. Here’s the original tweet: 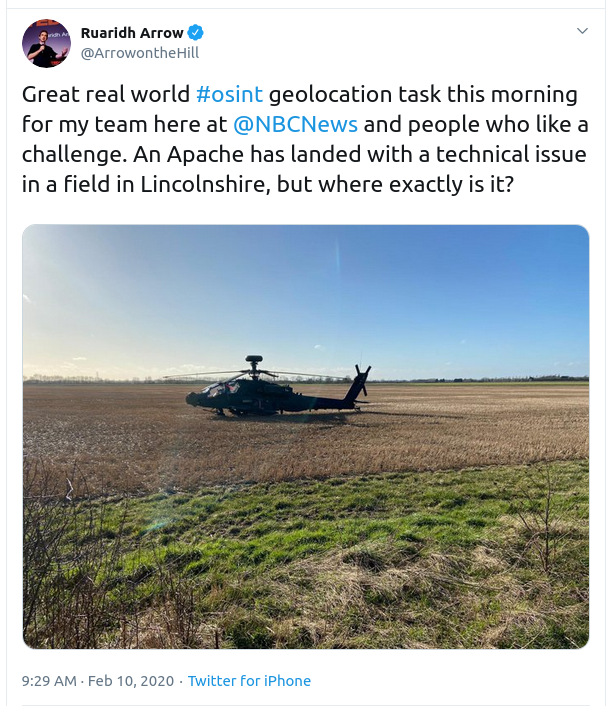 So where is the broken down Apache? Ruaridh already tells us that it’s in Lincolnshire, but this is quite a large area and we want to narrow this down to a few square metres if possible. The photo doesn’t help us all that much though. Lincolnshire is a large, flat area and there are very few distinctive features in the photo that will add any more precision to our search at this stage. This means we need more detail, so we need to find additional sources of information. The good news is that an Apache landing in a field is a very unusual event so hopefully there should be lots of other information out there, we just need to find it.

(I should point out that this incident took place more than two weeks prior to when I wrote this post, so the amount of available information has increased significantly since then, but for the purposes of this blog I’ve only used sources that were available at the time of the incident.)

The local newspaper provides us with several eyewitness accounts and some important photos. The first paragraph gives more information about where the helicopter was:

So the Apache landed in Helpringham, not far from Sleaford: 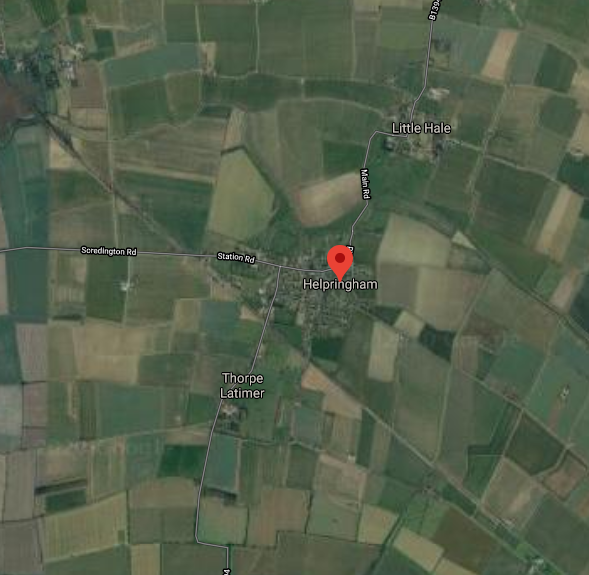 Well not really of course, we can do much, much better than this. We want to know exactly where the helicopter was if possible. This might only be a relatively unimportant incident in the Lincolnshire countryside, but the principle of refining searches and always seeking to be as accurate as possible is a good habit to cultivate. Let’s see what else the article can tell us. Here’s another picture:

This photo is taken from a similar position to the original one. It doesn’t add much more location detail – although the position of the sun might at least help with the orientation. 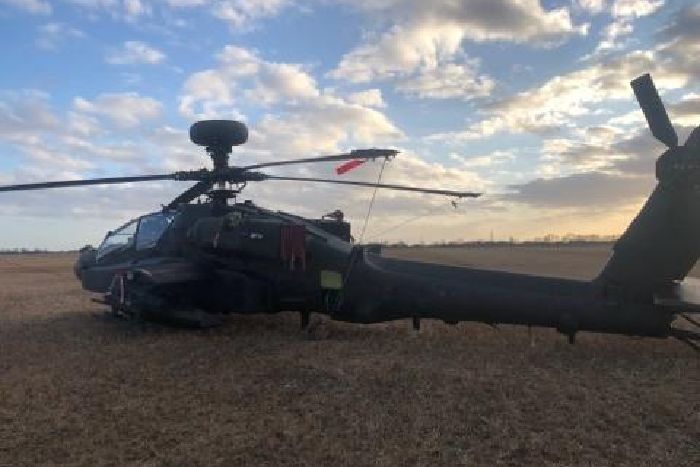 The next image (above) was taken just a few metres from the previous one, but it still doesn’t add much more detail. The next image is more promising though: 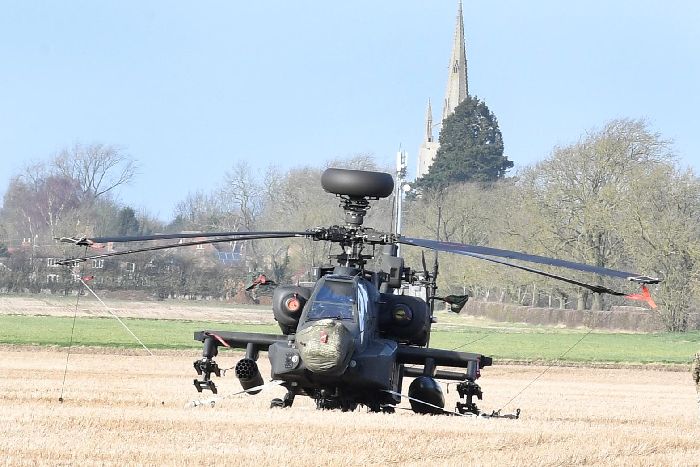 That’s much better! The image contains a wealth of details that will help to enhance the accuracy of the geolocation search. There’s a church spire, a phone mast, houses, solar panels, hedgerows and other details that will help us be very specific in locating this helicopter. By expanding the range of sources just a little we have added a lot more helpful detail. Next we need to use this new information to search around Helpringham in more detail, but we need to see if we can improve the quality of these photo sources a little first. The image above is only 700 pixels wide – this isn’t a very good resolution. The width of the image is actually specified in the URL:

Images used by media websites are often served in such a way that the size of the image to be displayed is specified in the URL. In the example above the image is set to w_700 (width of 700 pixels) but by adjusting the URL we can request a much larger version of the image from the server. Let’s get a version that’s 2400 pixels across instead by tweaking the URL as follows:

If you want to feel like a real pro, you can say “computer, enhance” as you hit Enter.

There’s also another image on the page that will help because it shows the position of the Apache relative to the hedge: And this one will help determine how far it is from the road: 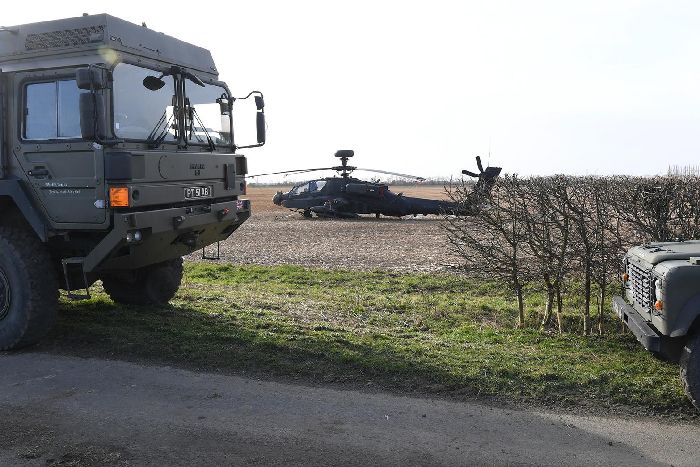 We’re already in a much better position to geolocate the helicopter than when we first started. Next we will highlight some of the details in the extra images we found to home in on the exact spot: The most obvious place to start is the church spire (yellow box). Next we can follow more or less from the spire to the phone mast (red box) to get the approximate location of the helicopter. The blue line is a hedgerow next to a road we can also use as a point of reference. The three purple lines indicate different fields, so know the Apache is in the third field from the position of the mobile phone mast as it appears in the photo. The houses and solar panels in the other boxes will help as additional reference points.

Here’s Helpringham, with the pin centred on the church: 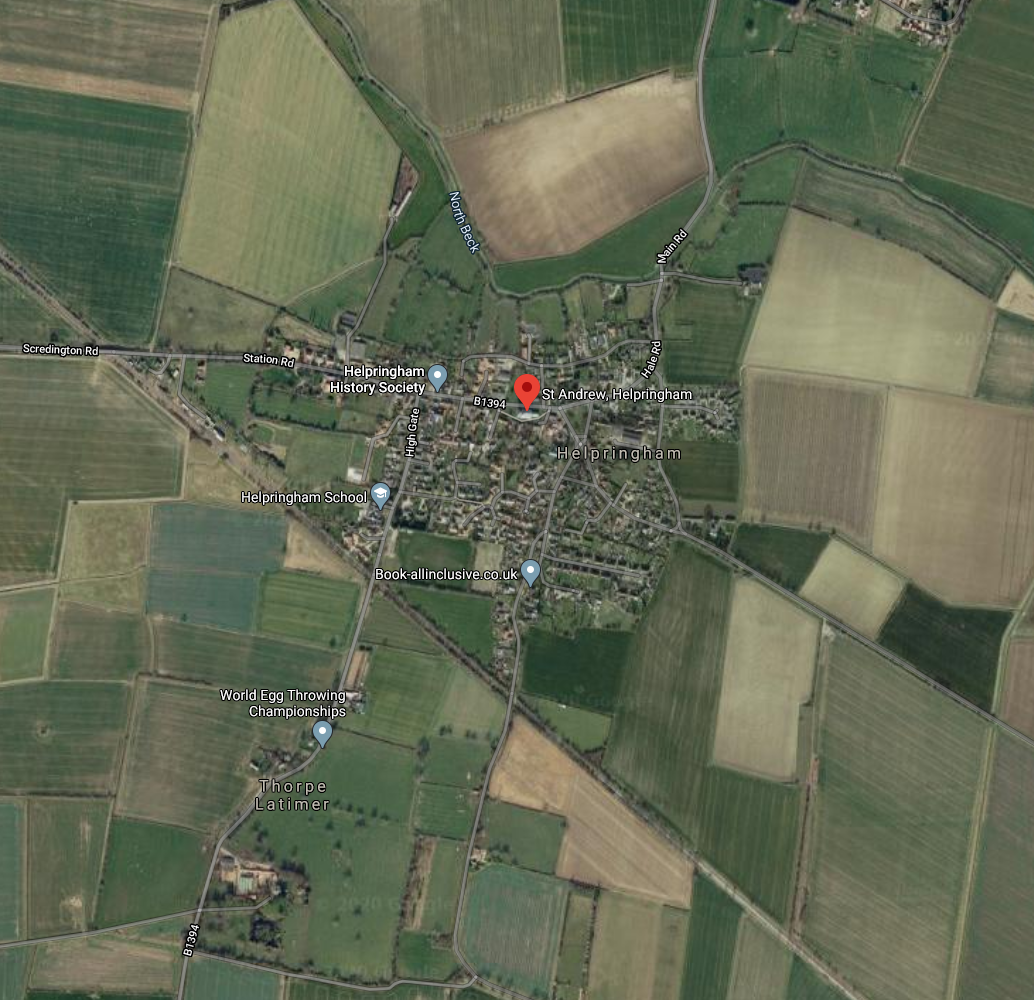 We need to use the details we found in the extra images to locate the exact spot. We’re looking for a phone mast next to a road. There aren’t many roads out of Helpringham, so it doesn’t take too long to find: The phone mast is highlighted in red. The hedgerow is the blue line,  so we know the Apache must be close by somewhere.

Streetview would be a great tool to help with an ultra-precise geolocation, but the age of the images might pose a problem. This is what the road looks like on Streetview: 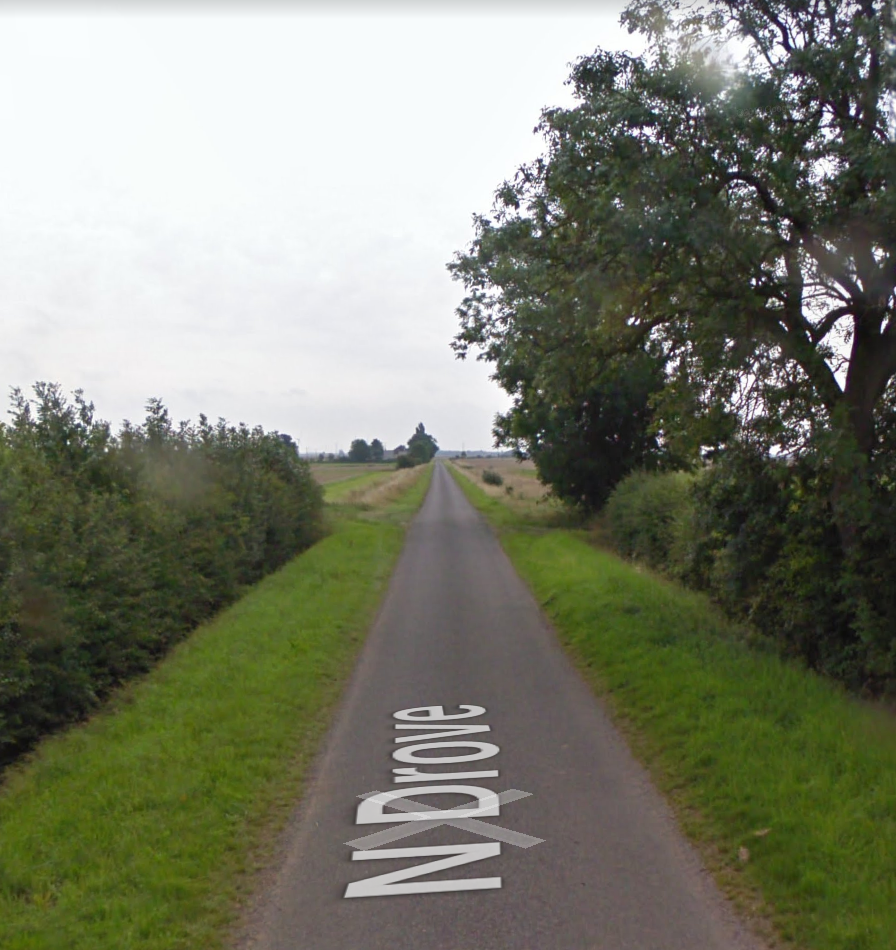 It’s an mage taken eleven years ago and in a different season, so direct comparisons to the Apache photos are difficult, although not impossible. We could just stop at this point and say that the Apache was located somewhere off North Drove, Helpringham. This was my initial guess and it’s definitely an improvement on just “Helpringham”, but we want to be as accurate as possible so we will need to extract even more detail from the source photographs.

The landscape surrounding the Apache landing site is flat and fairly featureless, but by picking out even the smallest of details we can help to confirm the exact landing spot. This means that some details that were initially too generic to be helpful are now more useful. For example the two pylons and a row of tall narrow trees visible in the distance of the source photograph: 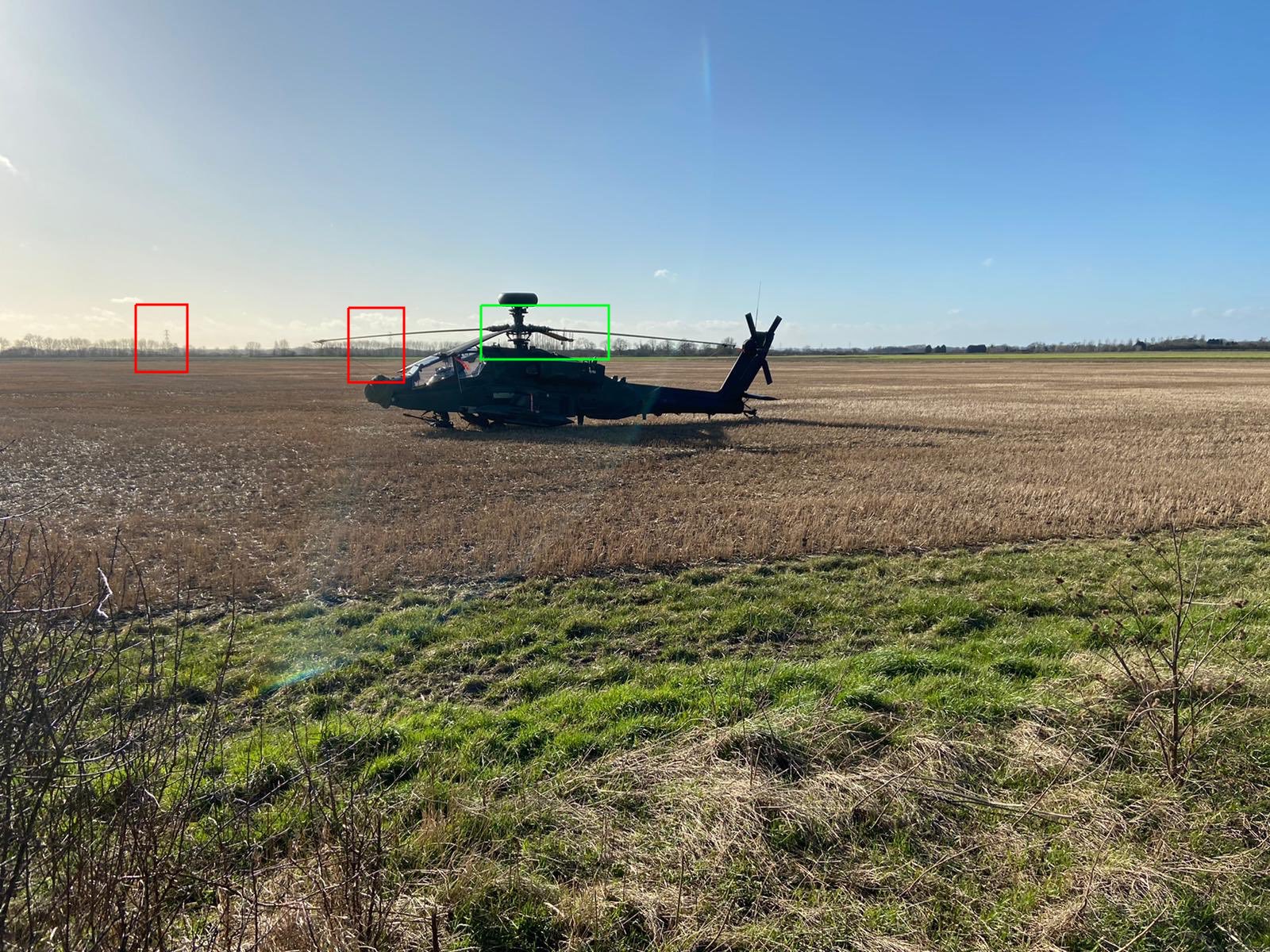 And on the other side of the road, we can see a telegraph pole in the field:

We can use Streetview to follow the road and identify where these features are. Here are some telegraph poles on the opposite side of the road:

And turning to the left, we can see the two pylons and the row of tall thin trees in the distance: Now we can add all the features that we’ve identified so far onto an aerial photo of the whole area: With all these reference points identified we can return to the original photo that Ruaridh asked us about and work out that the photographer was stood here at 52.942661, -0.282871. A final check with the reference points in the original image: 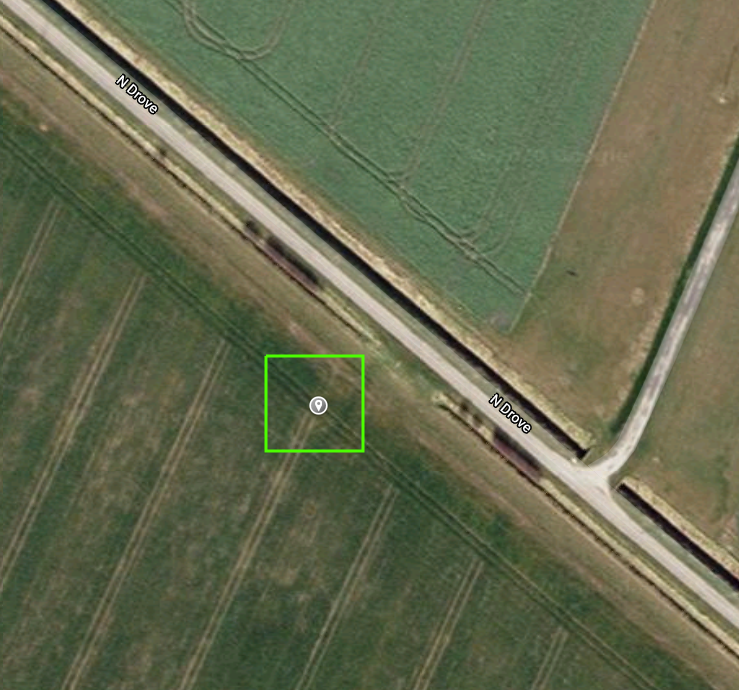 Admittedly “52.942558, -0.283232” doesn’t quite trip off the tongue in the same way as “just outside Helpringham”, but it does convey a great deal more accuracy, and sometimes accuracy really matters. It all depends on what you’re trying to use geolocation for of course and sometimes a town or a street is enough, but sometimes you might want to get within a few metres to prove the point that you’re trying to make. Expanding the range of sources makes gathering more information possible, and the more available information you have, the more precise it is possible to be.