When I was a child I spent a lot of time living around various military establishments in Germany. In the 1980s the north German plain was packed with NATO soldiers ready to fight the Russians in case they ever rolled over the East German border (remember when that was a thing?). Nowadays the Russians prefer to use spearphishing and poisoned door handles instead of tanks, so there aren’t as many soldiers in Germany as there once were. Today’s Quiztime challenge was a nice revisit to the part of Germany I once lived in and brought back a lot of memories of the endless NATO exercises that were so exciting to watch when I was a kid.

Did I truly pass this on my way to Zurich? If so, whereabouts? And who is it? Get a clear sight and tell me how you solved the #Fridayquiz. 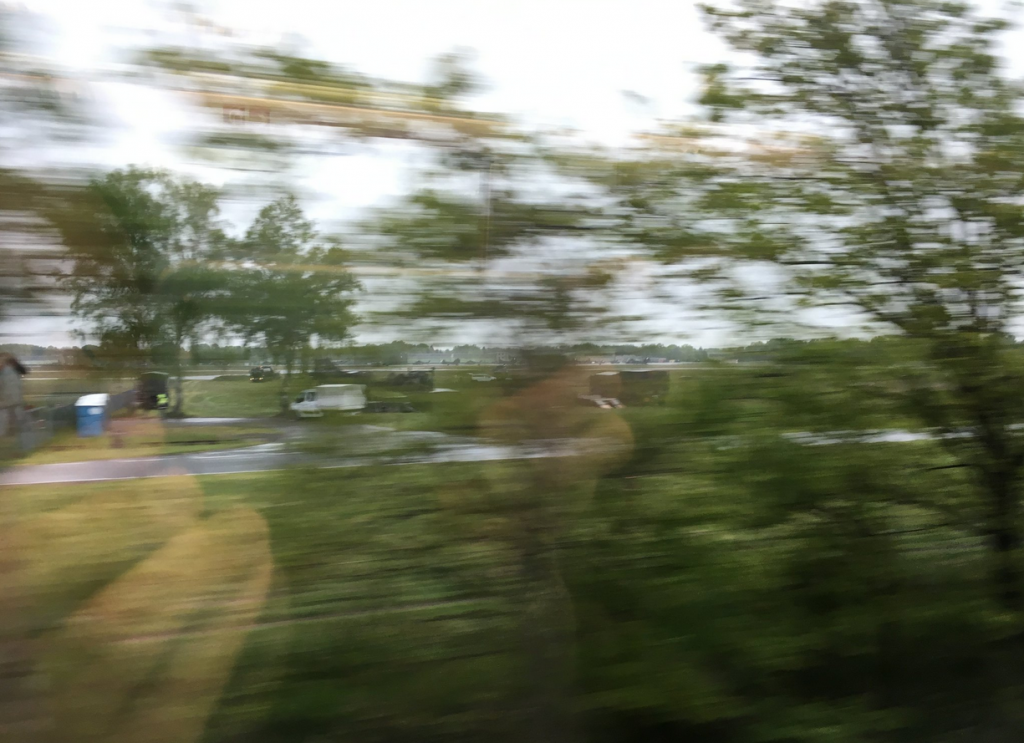 The photo is clearly taken from a passing vehicle. Fiete lives in Hamburg and so to travel to Zurich he’d have to go by train and travel North to South through the centre of Germany. The reflection in the window also suggests a train rather than a coach or car.

The key detail to solve this challenge is in the middle of the picture. Here’s an enhanced version: 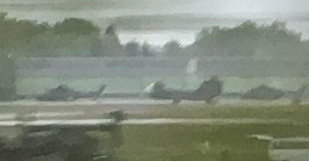 This close-up shows three helicopters. The one in the middle has the distinctive shape of a Chinook CH-47 helicopter, with rotors at the front and back. This is what one looks like close up: 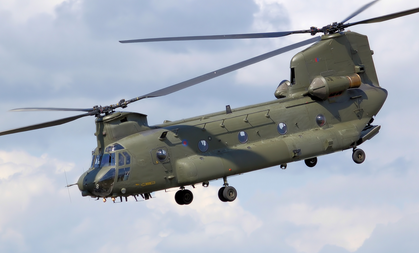 So this must be an easy challenge to solve, right? All we have to do is find where the German Air Force bases its CH-47 Chinooks, confirm the base is next to a railway line, and then we will find the location. There is only one problem with this: Wikipedia tells us that the German military do not operate Chinook helicopters. So either Fiete was not in Germany, or it is necessary to do a little more digging.

Geolocating military aircraft can pose a lot of problems. The most obvious one being that they are movable objects, and can travel anywhere at any time. Just because one is photographed in one location does not mean it has always been there. Secondly while there are a lot of resources for tracking civil aviation, there are not really any comparable resources for tracking military flights. Or are there?

One of the least recognised sources of OSINT for military aircraft is the dedicated community of amateur aircraft enthusiasts. Sites like scramble.nl and Fighter Control allow planespotters to post photos, serial numbers, and movement information about aircraft they’ve been to see. NOTAMs (flying area restrictions) can also provide insights into upcoming military air movements and large-scale exercises. This site has diagrams of most major combat aircraft to help with recognition.

Scramble has a forum dedicated to spotters who record the movements of military aircraft in Germany. Each airfield has its own thread, so it is possible to see all the popular base locations and records of aircraft movements in one place. Not every single flight is recorded of course, but it offers a lot useful insights.

I should point out at this stage that an alternative method could have been to check the list of all the air force bases in Germany, find one next to a railway line, and then work from there. This would have almost certainly have left Wunstorf Air Base as the only option, but it just doesn’t match the picture. The runway and perimeter track is too far from the railway line for starters.

I decided to use Scramble to learn about recent activity at German military airbases. There are actually not very many active military airfields in Germany these days so it didn’t take too long to go through them. In the thread about the base at Celle, I found this snippet of information: 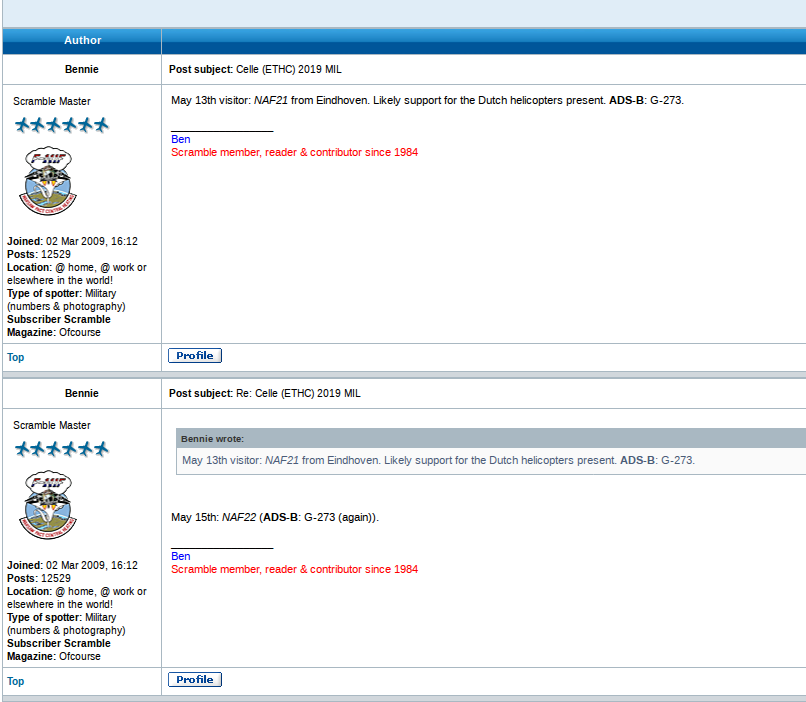 Bennie tells us that a support flight number NAF21 is flying to Celle from Eindhoven to support the Dutch helicopters that are there. Another quick piece of Wikipedia research also shows that the Dutch Air Force also fly CH-47 Chinooks just like the ones in Fiete’s original photo. This means that there is a high possibility that Dutch Air Force CH-47s were at Celle last month, but a little extra detail was needed before I could be certain.

If I’d tried the method of just looking for German Air Force bases on Google Maps to try and find a match, I’d never have come across this kind of information. This is also partly due to the fact that Celle was not a German Air Force base. It is a base for the Germany Army Aviation Corps, which is separate from the Air Force. A small detail perhaps, but easily overlooked.

But back to the Dutch Air Force link. Was there anything else to learn? An initial Google search for “dutch ch47 + germany” with time parameters set to the last 12 months brought back this article about Exercise Green Griffin, a joint Dutch-German military exercise that took place in Lower Saxony. Celle is in Lower Saxony, so that helped to confirm the theory that the helicopters in Fiete’s picture could be at Celle.

I focused on searches for Exercise Green Griffin and found lots of really useful information. This article from a local news site provides a lot of extra detail. It even says that there were 10 NH90s, 6 Tigers, 6 AH-64 Apaches, 5 CH-47 Chinooks, and a single C-130 Hercules present at Celle.  The article also includes this picture of the helicopters taking off:

For more confirmation overkill, there’s even a full-length video about the training exercise. The description states it took place in the Celle-Bergen-Nienburg area, which once again provides additional confirmation about the location. The footage starts with the helicopters taking off and landing.

There is so much information in this case that it is easy to overlook more traditional means of confirmation. All the aircraft information indicates Celle was the location, but there was one final way to confirm with a quick Google Earth comparison. Below is a picture of the railway line running along the edge of the base at Celle. The red box corresponds roughly with the field of view in Fiete’s original photo.

Note the building just appearing on the left, the junction on the perimeter track and the position of the trees. This final wider view looks towards where the helicopters were parked: 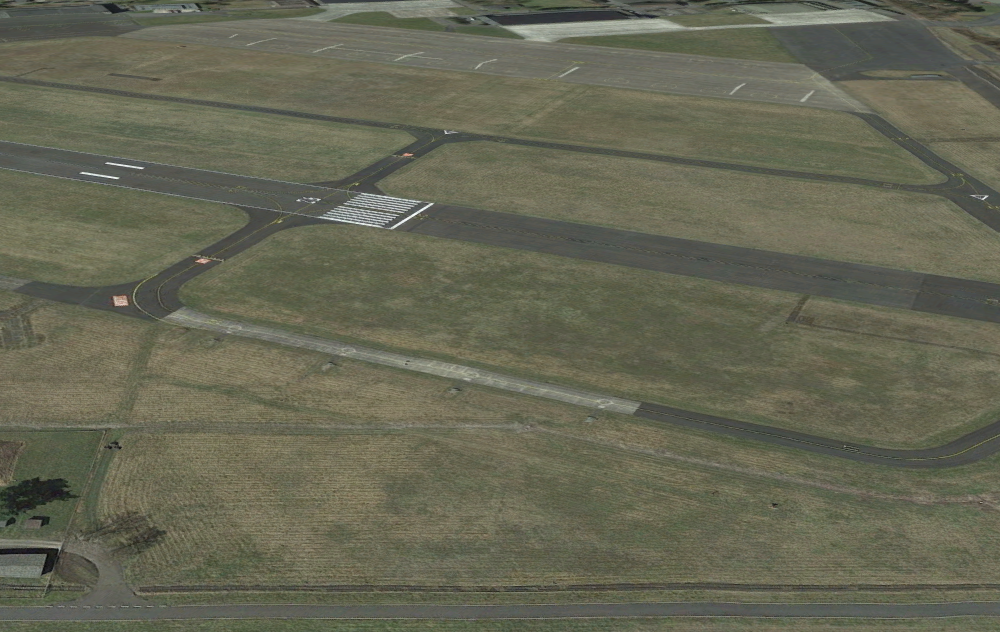