One of my life rules is never to make important decisions after 9 o’clock at night. It starts to get late, a tired mind doesn’t focus as well, and anything important can be delayed until the morning when things are clearer. It should also be one of my rules not to start OSINT challenges after 9 o’clock at night for the same reasons, but just as I was about to turn off my PC up popped Philipp Dudek with a late-night Quiztime challenge. I should have waited until the morning but I couldn’t resist making a start.  In the end my solution was a bit long-winded and there were other ways to solve it, but that’s always the benefit of hindsight.

Philipp’s challenge was simple: where was he when took this photograph? 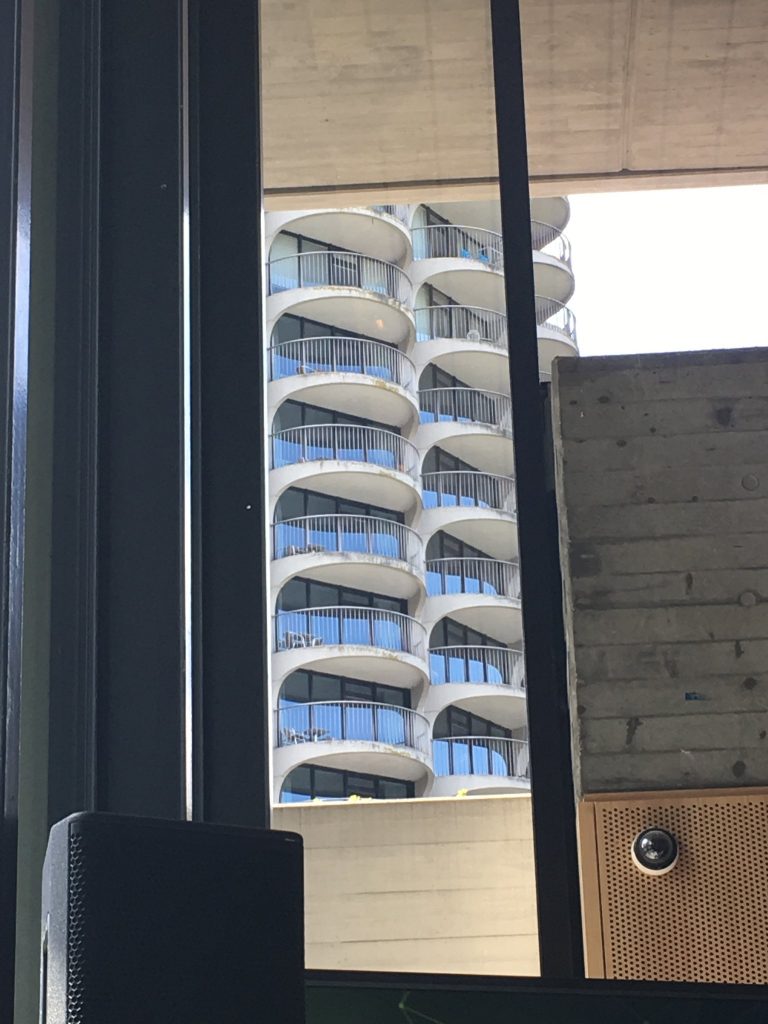 So really this was a two-part challenge. Firstly to locate the distinctive building with the curved balcony, and secondly to work out Philipp’s precise location when he took the photograph.

I found the location but my method was a bit long-winded. Like several other Quiztimers I went for a reverse image search with both Google and Yandex (I have to say Yandex seems to give far better results than Google these days). The most immediate – but wrong – answer was that the location was the Marina City Complex in Chicago: 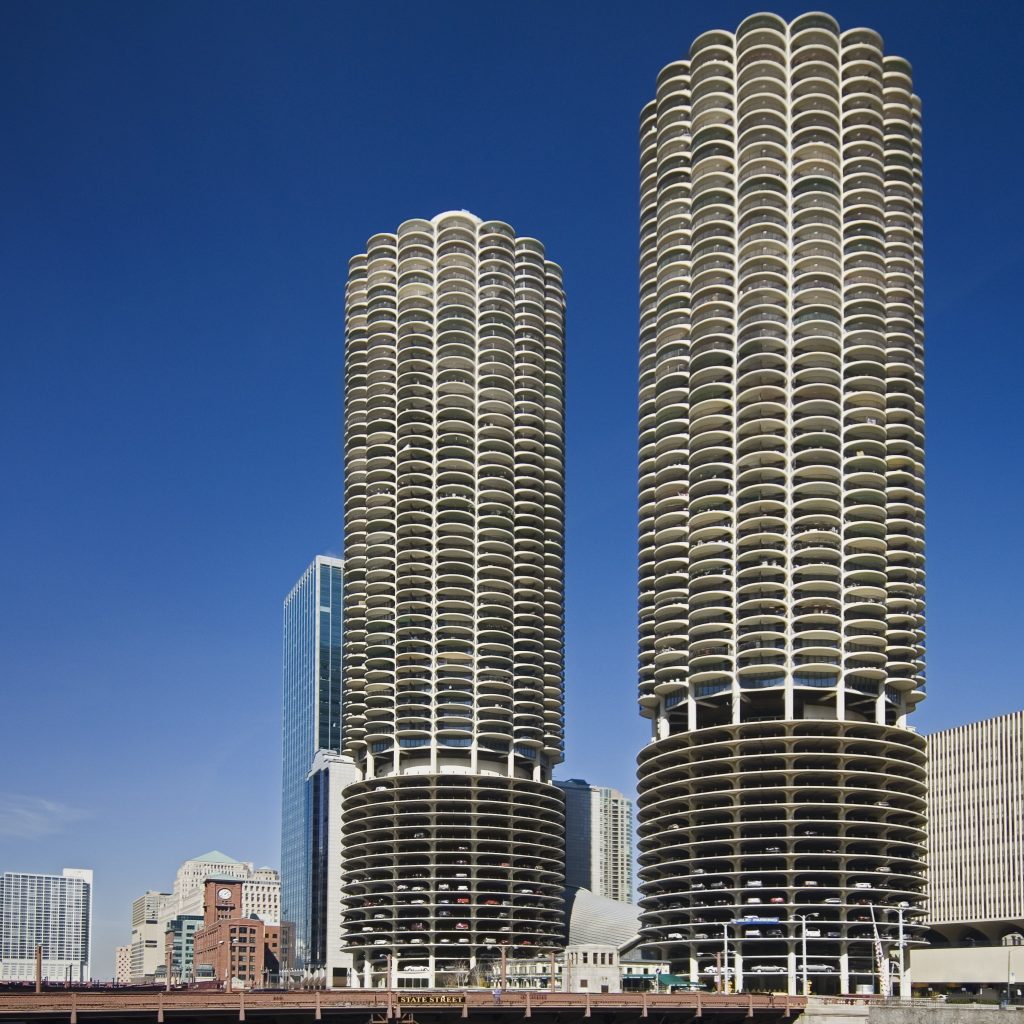 It has similar distinctive balconies, but with checks for further detail it is clear it is not the correct building. As this closeup shows, the Marina City windows are made up of five glass panes and a door, whereas the tower we are looking at only has rooms with four glass panes:

This location also came up in the reverse image search with Yandex (but not Google). The balcony design and number of window panes is also correct, so it was a strong candidate for being the location Philipp had photographed: 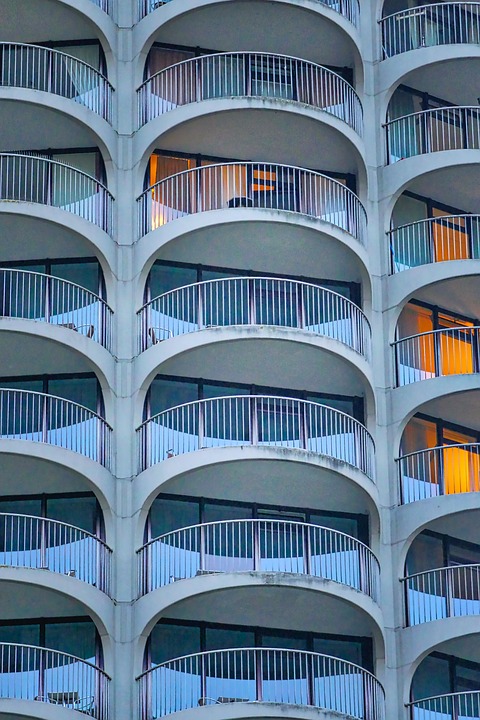 The image had been uploaded to MaxPixel and contained some useful EXIF data. Unfortunately there was no GPS data but I decided that by researching the photographer who took it and browsing his photography collection it might be possible to find out more about where he took it. The man who took this image was a professional photographer called Albrecht Fietz (he’s really good at photography too) and although he is based in Landsberg am Lech, it is clear from his photos that he travels widely in Germany and also in the UK, which didn’t really help me narrow down the probable location. Landsberg am Lech is too small a town to have high-rise buildings like the one in the challenge so it couldn’t be correct, but when trying to find Albrecht’s photography site an additional hit came up which showed he was employed as a photographer by a church in Augsburg – perhaps that could be the location?

A very quick image search in my best German for “turm + balkon + Augsburg” (tower + balcony + Augsburg) immediately brought up the correct location: the Dorint Hotel Tower in Augsburg. Thanks Albrecht!

So now I had found the location, I decided to make use of Google Earth and its 3D view to try and guess where the image was taken from. There were a only a few real possibilities and it was quite quick to find the exact building.

I briefly considered this block of flats as location. It has balconies that face the hotel, and at this stage I still thought the original image might have been taken from a balcony, but the security camera and speaker would be unusual for a residential setting, so after a little deliberation I discounted it.

This only left the building next to the hotel, the Augsburg Kongress Halle. This turned out to be the correct building but trying to find the interior location where Philipp took the image from was the hardest part of the challenge. I began by looking at the Kongress from the outside and then trying to eliminate as much of the building as possible. The easy part was to eliminate all parts of the Kongress that faced away from the hotel: 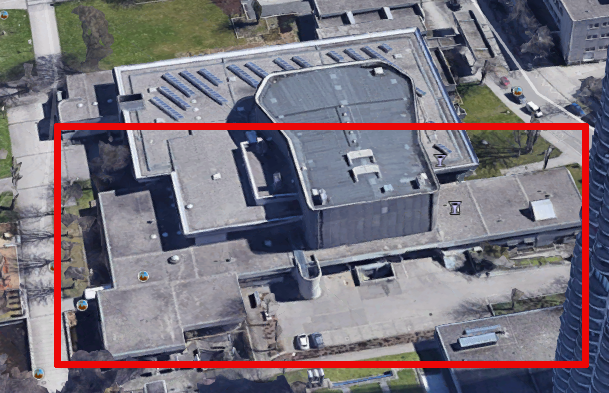 Every part of the building within the red box could contain the location that Philipp took the image from because all these locations face towards the hotel, which meant all the other parts of the building could be immediately eliminated. Fortunately the Kongress website includes a floor plan that means it is possible to visualise the interior of the building and help eliminate different parts of it by comparing them to the quiz photo.

The website also offers a huge range of interior photographs of all the rooms, but instead I went straight for the 3D virtual tour. I mentioned in my last Quiztime post that having good tools is no substitute for a good investigative method, and this proved to be a good example of why. Although a virtual 3D walkthrough of a building is an absolute gift  for OSINT purposes, it is important not to be blinded by the technology. Does it actually show me everything? What are the limitations? What does it miss out? What incorrect assumptions does it cause me to make?

So despite clicking my way through the whole 3D tour, there was no location shown that matched where Philipp took the photo from. I’ll come back to why this is at the end.

With no success on the virtual tour, I decided to use the floor plan and the large collection of interior photos to find the matching location, or at least eliminate locations that were incorrect. I eliminated the main Kongressaal (no exterior windows) and this photo of the restaurant from Google Earth caused me to eliminate that too: 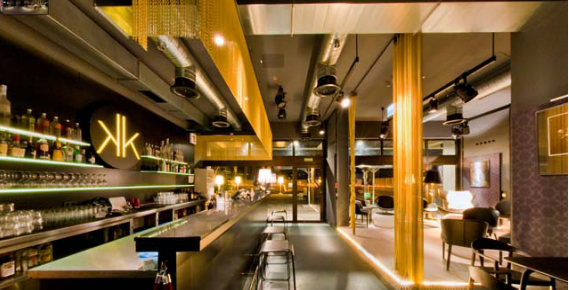 The Hypovereinsbank room was also eliminated (no windows that face the hotel tower) and I was about 80% confident I could eliminate the Dorint Room too. It faces the right direction but the interior doesn’t seem to match Philipp’s photo: 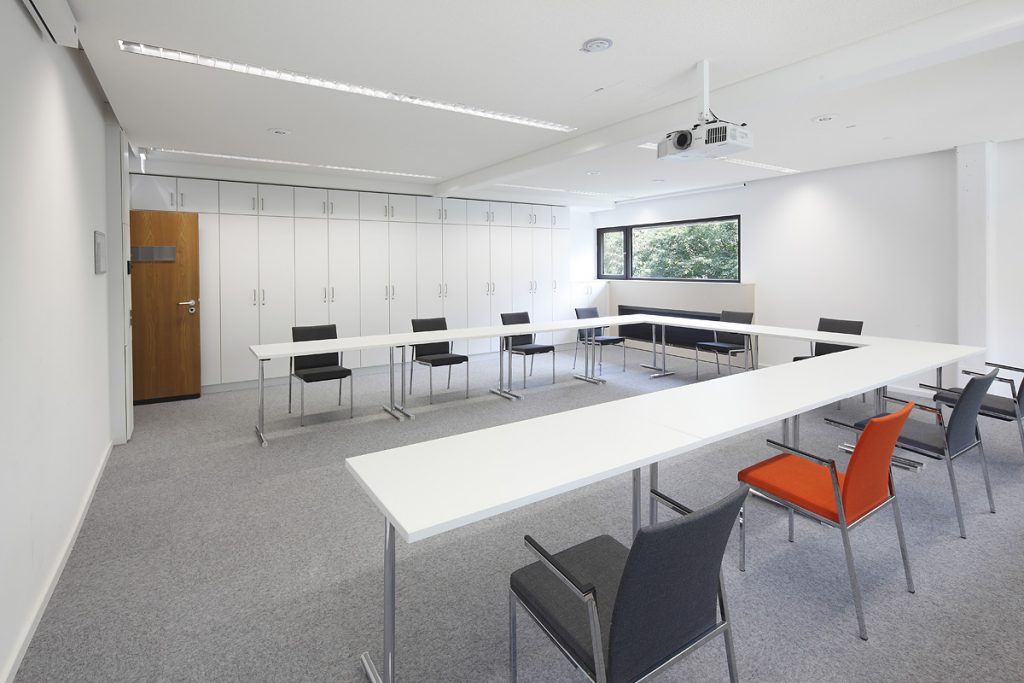 This brings me back to the issue of tools and their limitations. It would have been easy to discount the Klassik Radio Foyer if I took it for granted that the 3D tour shows everything – but it does not. The virtual tour shows only the part of the room next to the main entrance and misses out the side part of the Foyer that runs alongside the Imhofstrasse entrance. This isn’t obvious when you use the 3D view, but comparing the 3D view to the 2D floorplan makes the limitations clear. Fortunately there is a large collection of images of the whole of the Klassik Radio Foyer which allows a more detailed look at the interior. The method to eliminate all the other rooms had been correct, and sure enough the part of the Klassik Radio Foyer that is not visible on the 3D tour was the correct location:

The speaker in the original photo is missing, but the tower, black window frame and security camera bubble on the wooden are all present.

Max Bernhard also got the right answer and with a neater solution than mine. Max noticed that Philipp had attended the Rocketeer Festival at the Kongresshalle earlier this month and so that led him to the location (this is more efficient than stalking local photographers). Then by searching social media associated to the event he found this picture that also gave the right location: 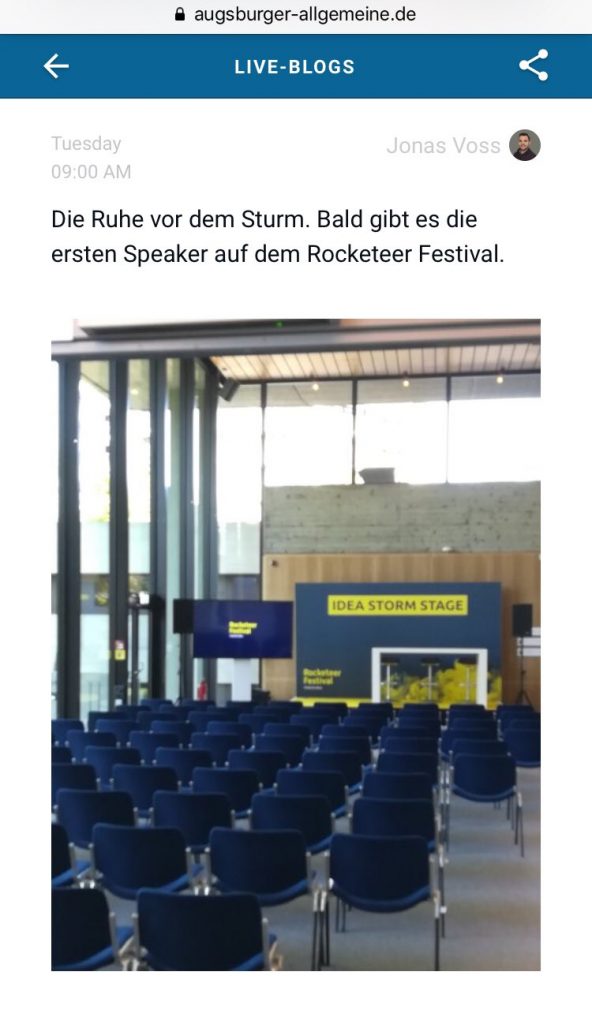 Sometimes (almost always in fact) it pays to research the messenger and not just the message!