I don’t think any investigative training programme ever recommends that you just use your gut instinct to reach a conclusion. This is not necessarily a bad thing because any conclusions that an investigator reaches has to be support by objective evidence. Anyone should be able to take the same steps and come to the same conclusion.

That said, any experienced investigator will always rely heavily on gut instinct, even if they don’t realise it. The simple reason is that instinct is a far more rational process than we realise. In a split second our brains make dozens of unconscious calculations based on previous experiences in order to come to a very quick decision. Gut instinct isn’t just mindless reaction. It is, as Malcolm Gladwell puts it, “thinking without thinking”  and it’s foolish to always ignore your instincts about something.

What’s any of this got to do with OSINT and image geolocation? Well for the first part of my solution to Juri’s Quiztime challenge began with a hunch that the location was in Eastern Europe based purely on the look and feel of the photograph. I had no real objective way to show this was the case, but it set me in the right direction.

The aim of this challenge was to find not only where the image was taken, but which floor of the building it was taken from. This was a hard challenge. There is nothing immediately obvious to show where in the world it was taken, let alone which city or building. The background detail was too blurred to be useful for cropping and reverse image searching, and the chair and tables in the foreground just aren’t very distinctive. So where to start? I had a hunch that this was in Eastern Europe, although I could not explain why. With hindsight I think my gut reaction was ‘Eastern Europe’ purely because of the concrete tower blocks. It didn’t resemble anywhere in Western Europe that I knew, and the vegetation and housing didn’t look right for Asia or Africa.

In previous Quiztime blog posts I’ve written a lot about starting big and then refining the parameters of a search to get small and eventually find the right location. I took a similar approach with this photo. Instead of “big” and “small” I used the idea of “global” and “local”. Global clues would be something in the image that might tell me roughly where in the world something was. Local clues would be something that would help me find the precise location once I’d used the global clues to find the approximate area.

The items in green boxes were what I classed as “global” indicators – if they can be identified and then put together they will show roughly in which city or town this is. The items in red boxes are “local” indicators: they are not distinctive or prominent enough to help find where in the world this is, but if the right approximate area could be found with the global indicators, then the local indicators could be use to home in on the right area. It might not be obvious exactly what I was looking at so here’s a summary:

1) A single-decker bus with a red and white livery. Specifically it is red at the rear lower back end, and white everywhere else.

2) A distinctive group of towers, much bigger than the surrounding buildings. One looks like it is yellow.

3) A green motorway sign that looks like it is pointing to an exit. Appears to show a single digit road number.

1) The motorway sign again. Just shows the location will be next to a motorway, possibly at an exit point.

2) The strange tent-like roof leading to a bridge that goes over the motorway.

3) The table and chairs. This probably the most “local” identifier and will be only useful for verifying the final precise location.

So the following things will be true of this location:

It will be in a city that has red and white buses. A dominant feature of the city will be a tall yellow building. The tall yellow building will be in line of sight of the location. The location is next to a motorway that probably has a single digit number. Next to the location there will be a strange white tent-like structure that leads to a bridge that goes over the motorway. Inside the building there will be a cafe or restaurant with chairs and tables that look like the one in the picture. Oh, and it’s probably in Eastern Europe, although there is no real objective reason (yet) to say this is definitely the case.

I started with the bus as I thought it would give the best chance of finding the country and city. I’d decided to focus on Eastern Europe so my method to search was to use Google Images and search for country AND red and white bus. It was a little crude but it worked. First up was Poland. There are a few red and white buses, but they were old and didn’t look like the one in the picture. Next was Slovakia. There weren’t loads of matches, but this photo above looked promising i.e. mostly white with red at the back. I couldn’t discount it so I added Slovakia to the “maybe” list. 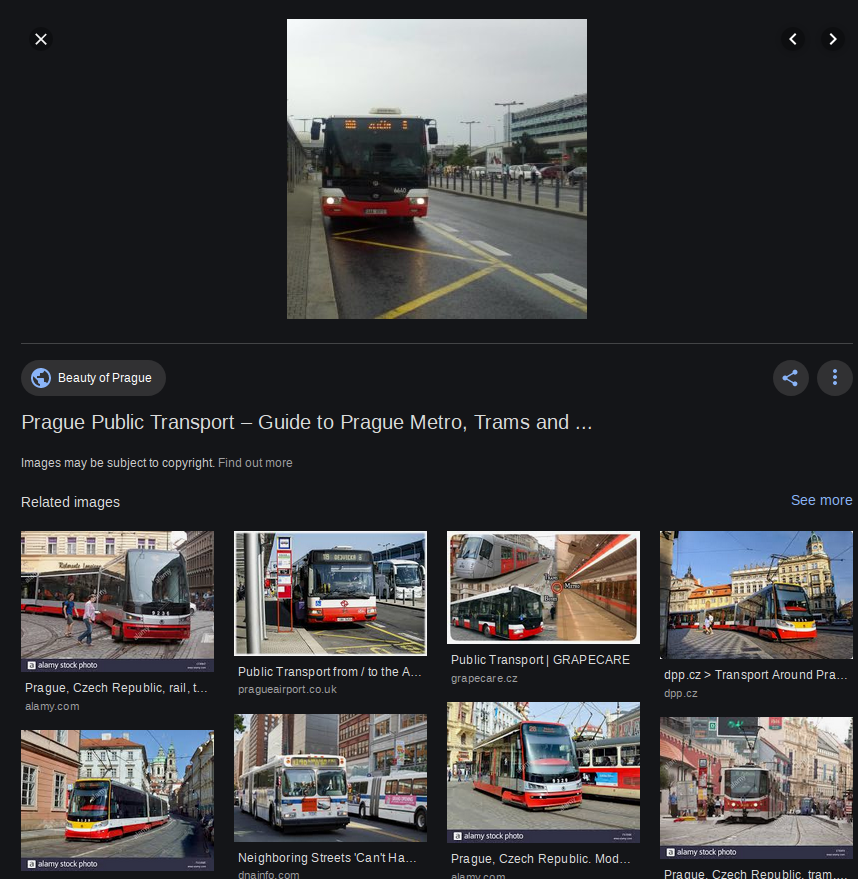 I got a little frustrated at this point. I’d only searched for buses in three countries, and already two of them had red and white buses that were possible matches. What if I ended up searching across ten more countries and found ten more matches? It would take forever. I took a bit of a gamble at this point and decided to switch from countries to cities. If I was wrong I could always just switch back to searching through countries again.

I looked up the ten biggest cities in both the Czech Republic and Slovakia. Then I used a similar Google Image search again and just used city AND bus. Most cities didn’t turn up much, but Bratislava, Brno, and Prague all looked like they used red and white buses. If I’m quite honest, it was a time consuming pain in the a** to distinguish between these three possible cities, especially as I was aware there were plenty of other European cities I hadn’t even looked it.

I used the motorway sign to eliminate Brno as a possibility. The sign appeared to show a single-digit motorway number. In Brno only a short part of number 2 motorway is a single digit. I couldn’t find any areas that looked like the location after a quick check with Google Maps in 3D view.

Bratislava also had the same motorway (2) running through it, but again I couldn’t find anything that resembled the right location. This just left Prague, but Prague is surrounded by highways 0, 1, 2, 4,6, and 7, all of which could have been the single digit numbered motorway I wanted. 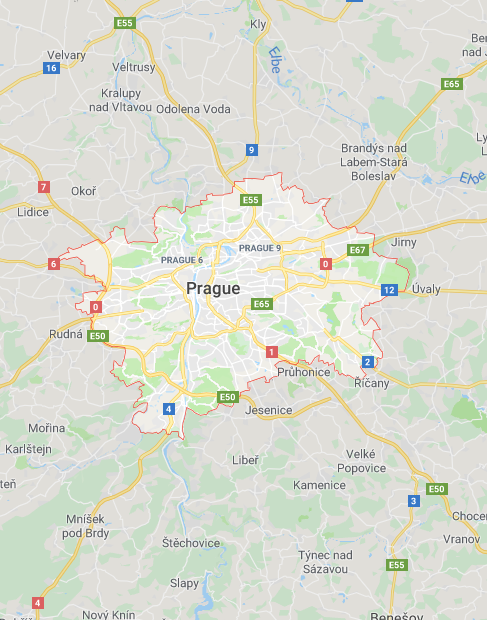 I’d spent a long time at this point just looking around cities in Google Maps 3D view. It’s a terribly inefficient way to find a location, especially when I was well aware I might not even be looking in the right country. It felt a long way from the table and chairs in the picture and I got a little bit fed up.

After a break I came back and tried a different approach. It felt crude but it worked. I forgot about buses and decided I would focus on Prague over Bratislava because my 3D viewing showed that it had more high-rise buildings that Bratislava. If I was wrong, I could always go back and look somewhere else. 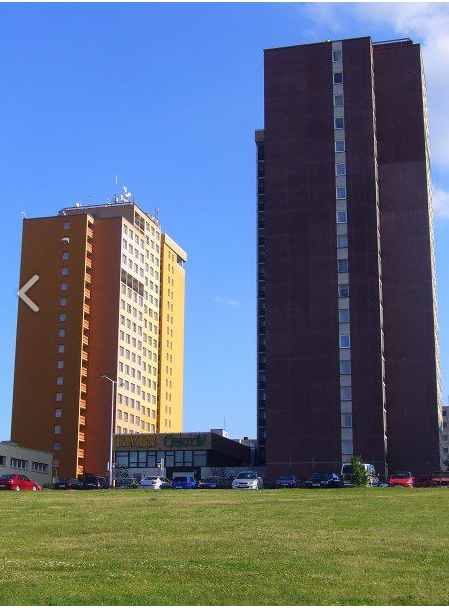 This tall yellow building is the Hotel Opatov in Prague. It looked an awful lot like the tall buildings in the original photo. If it was the Hotel Opatov, I would be able to switch to Google Maps 3D view, find a motorway in line of sight of the hotel with weird tent and a bridge over it and then I would have found the location. Here’s the original photo showing the towers:

And here’s Hotel Opatov on a map: It’s next to a load of tower blocks – check!

It’s near to a motorway – check!

The motorway is numbered with a single digit – check!

So I switched to 3D view to try and recreate the original image as best as I could: 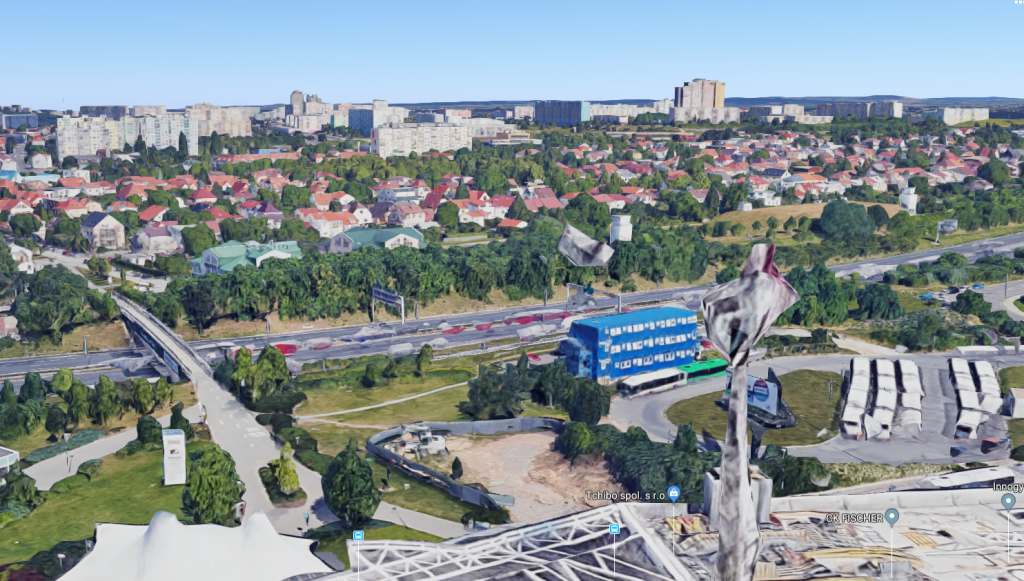 This was as close I could get in 3D view. The angle is slightly off but with the Hotel Opatov on the right in the far distance, the motorway in the foreground, and the bus depot on the right, this means the location is Centrum Chodov in Prague. The hunch was right!

Closing In With Local Indicators

So the global indicators lead me here. To find the precise location I had to find the local indicators to confirm I was right. Firstly, there was the odd tent structure next to a bridge over the motorway: 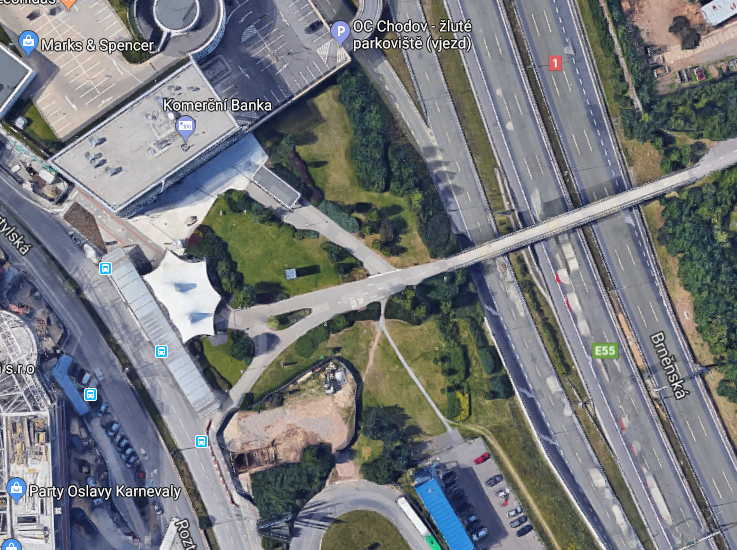 The “tent” is actually the roof for the bus station. I had to use Streetview to find a picture of a bus to see what they really looked like close up: 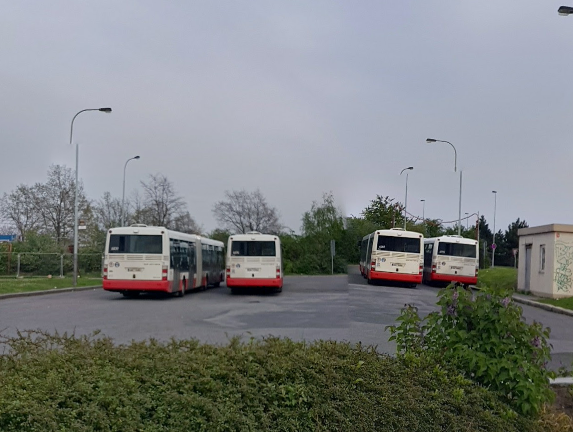 Bingo. Parked in the same place and in the same colour scheme as the original photo. Next I checked the motorway with Streetview: 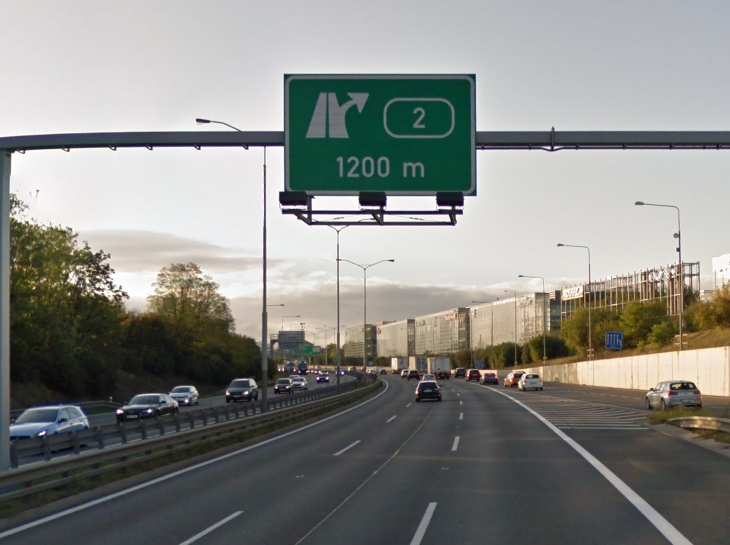 This is the sign close up. Perfect match for the original photo and displaying an exit for motorway number 2.

The puzzle wasn’t quite solved yet though – I still had to find which floor the image was taken from. I turned the 3D view through 180 degrees and found this: The Centre was obviously still under construction when this was taken. So I got a more up to date version from Google Earth photos: By cross-checking with the original image and Google Maps 3D it was possible to say that the photo must have been taken from  a location near to one of these windows. But which floor? The angle was too high for it to have been the ground floor. There’s a Spicy Mama restaurant on the first floor, but I couldn’t find any interior pictures that matched the original image, even with the interior panorama.

I figured that when you want to know where something is in a shopping centre, you just go and find a floor plan. I decided the best way to find the precise location would be to find a floor plan for the Chodov Centre and then try and locate interior photos of all the possible locations until I found the right one.

I started with what I knew – that the location was either Spicymama, or very close to it. The interactive floor plan showed that there were only cafes on floors one and two, and so there were only a very small number of possibilities.

The interior of Spicymama just didn’t match. Neither did Kobe Fusion on the floor above. 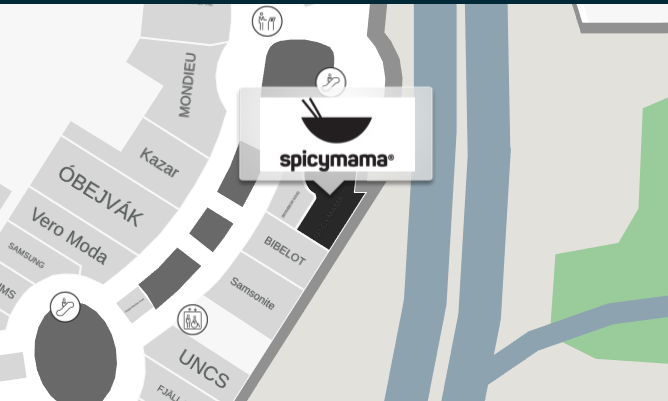 I readjusted slightly and checked the next location nearby that sold food and drink – the Page Cafe. A quick search through Facebook for photos of “Page Cafe Centrum Chodov” brought back this match: 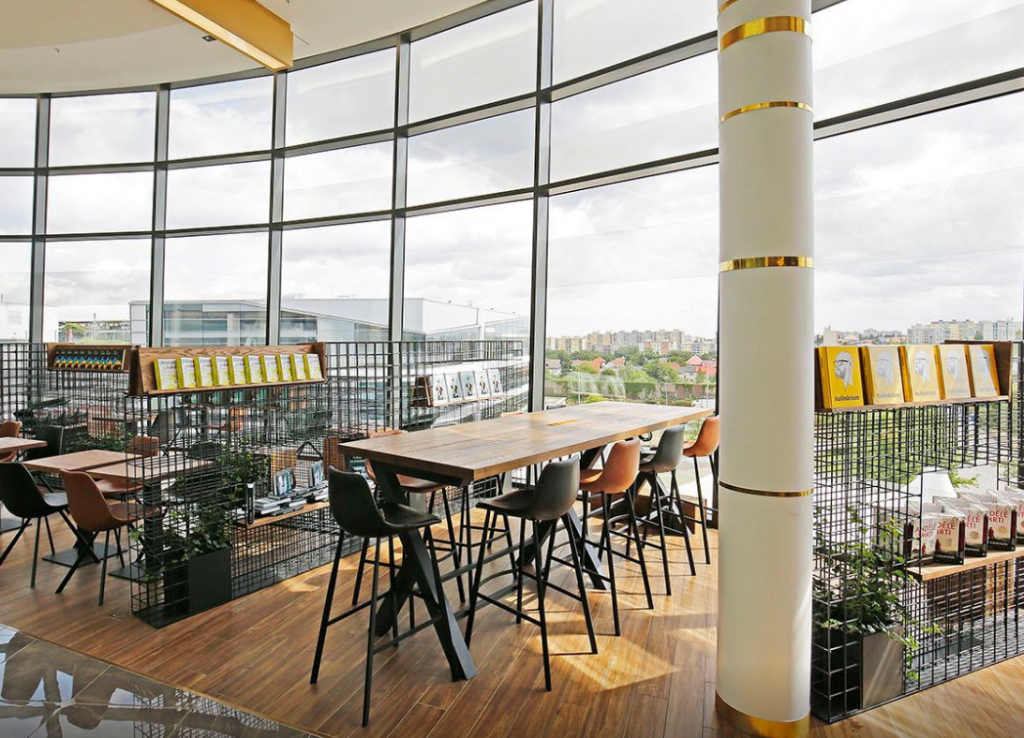 Perfect! The tables and chairs match, you can make out the bus station roof outside, and even the cages for the books are the same.

I was really pleased to find this location because it was a hard challenge. My Eastern European hunch was right, and despite the initial frustration the method of working big to small or global to local paid off again.

1 thought on “Where In The World? Global and Local Identifiers – Quiztime 12th Sept 2019”