I started writing up this Quiztime post almost two months ago but then life got very busy and I never managed to finish it. This was a really fun quiz by Lars Wienand and the solution was not as obvious as I first thought it was so a little extra digging was required. Here’s the original photo that Lars posted: 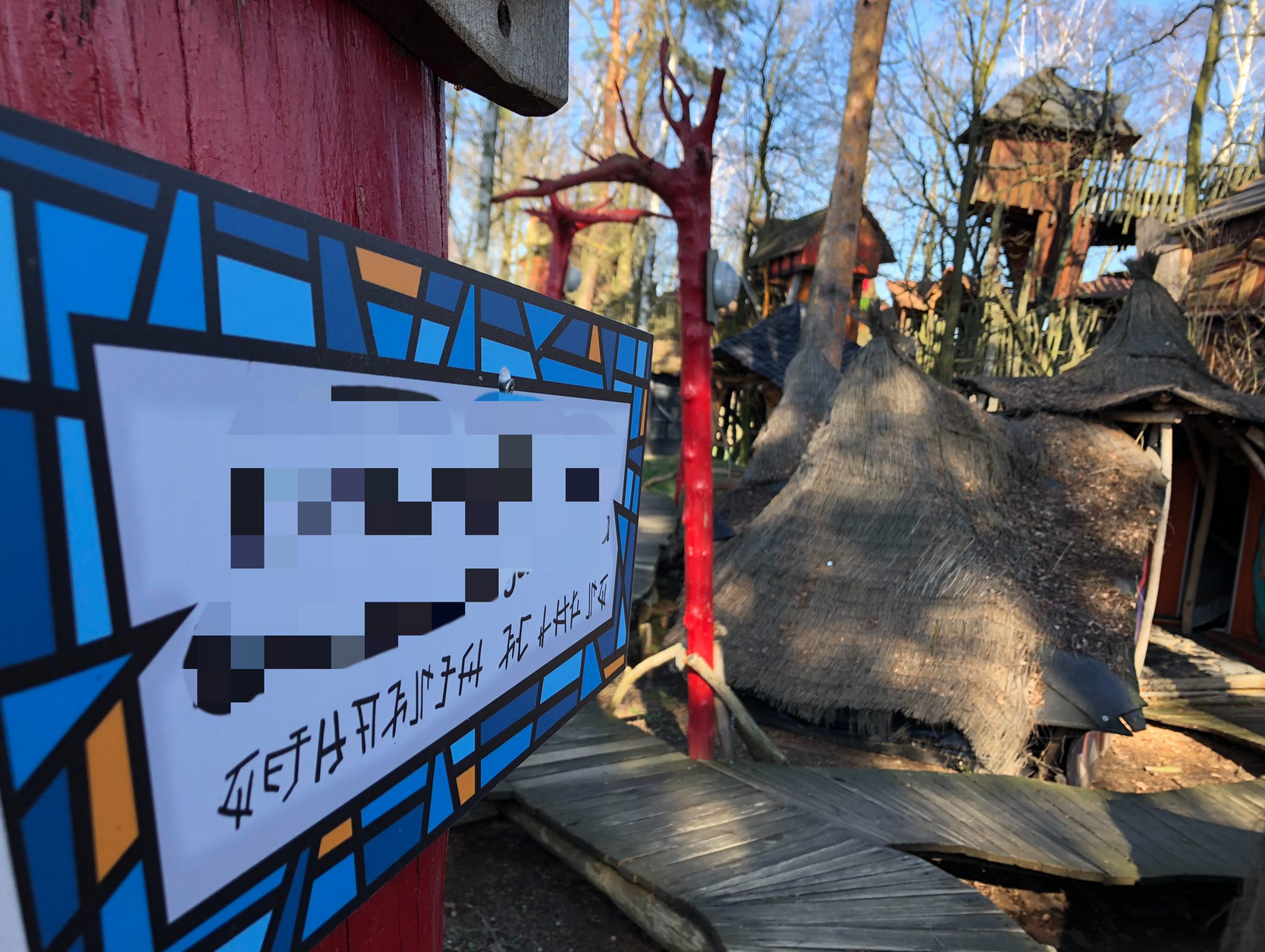 The two questions we have to answer are:

1) Where was this taken?

It was not immediately clear where the picture was taken so I focused on the sign. It’s obviously not written in a western language, but I didn’t recognise which language it was. It wasn’t Chinese, Arabic, Urdu, or any other non-Roman language that I could find, and I was slightly suspicious of its origins.  I realised that there might still be other languages that I could have missed, so to avoid any doubts I decided to make use of Google Translate’s ability to recognise characters in an image and translate them to English (or any other language for that matter). I saved the image to my phone and then uploaded it to Google Translate. Sure enough the app picked out the strange characters:

Since I didn’t know what the language was I set it to Auto Detect. Here’s what Google Translate thought the sign said: 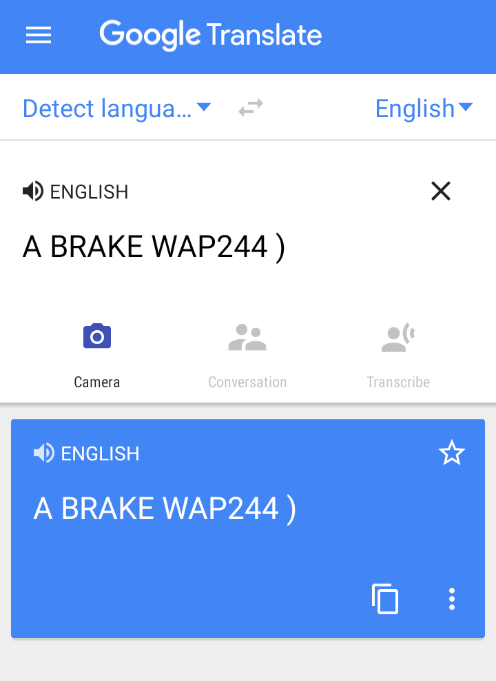 Hmm. My suspicions were right – neither I nor Google recognise this strange language, so it is probably something very niche and specific. There was not much else I could do with this text for now, so I decided to try a different approach.

Incidentally if you want to see a good example of how the Google Translate technique can work for geolocation, have a read through this thread where Matthias Cantow used it to solve another OSINT challenge by translating some Japanese street signs.

The sign wasn’t helping to locate the image, and since it wasn’t helping I decided to ignore it. Instead I focused on the other half of the image featuring the little wooden huts. If you do not have any success with a reverse image search sometimes it can be more helpful to crop parts of the image and just focus on those specific details. By far the best tool to do this is with the browser addon Search By Image. I’ve written about how to use it here and also made a short video guide with another Quiztime example here.

I cropped out the huts and used Yandex to conduct a reverse image search:

Yandex is still the best search engine for matching images by visual similarity, and it came up with some promising matches straight away:

The first image on the left bore a strong resemblance to the huts in the quiz picture, so it was the best place to start exploring. Here’s a bigger version of the image: 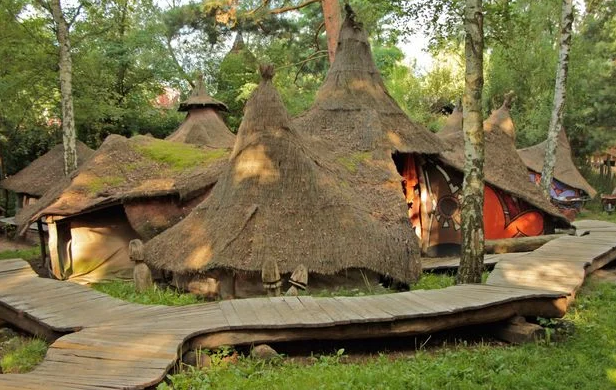 A further reverse image search on this image led to this page, which says the huts are part of the accommodation at Waldsiedlum in Neißeaue, Germany. A quick search in Google Maps brings up the location here.

So the Waldsiedlum has lots of strange little wooden huts like those in the picture, but that doesn’t mean it is the correct location because small wooden huts are hardly a unique feature. Besides there is still the issue of the strange language; it is definitely not German and we can’t just ignore it the parts of the puzzle that don’t fit. The best way forward was to explore the Waldsiedlum in more detail to see if it took me any further. If it didn’t I could always retrace my steps and go in a different direction.

A quick Google search lead to the official site for the Waldsiedlum, or as it is better known, Turisede.

Turisede is a woodland theme park full of huts, treehouses, and other attractions. More importantly, as I browsed through the website looking for more information I came across a few images that referred to “Ronkads Reimekaub” (Ronkad’s Rhyme Robbery). I have no idea who Ronkad is, but look at the strange text that accompanies each reference to him:

It’s the same strange language that appears on the sign in the original photo that Lars took. This means that Turisede is now almost certainly the correct location, but also that somewhere in this website there must be more information about these strange symbols. Google allows you to search for terms within a specific site, so I decided to search for other references to “Ronkads Reimeraub” all across the Turisede.com site. The search term goes like this:

I am more interested in image matches rather than text matches because it is unlikely that this strange language is indexable by Google. In every instance of it I found on the website the “text” was actually a JPG file, so an image search will be better. Here are the results:

Not only do we have more examples of the mystery text, but there is also what looks like a translation guide – bingo! 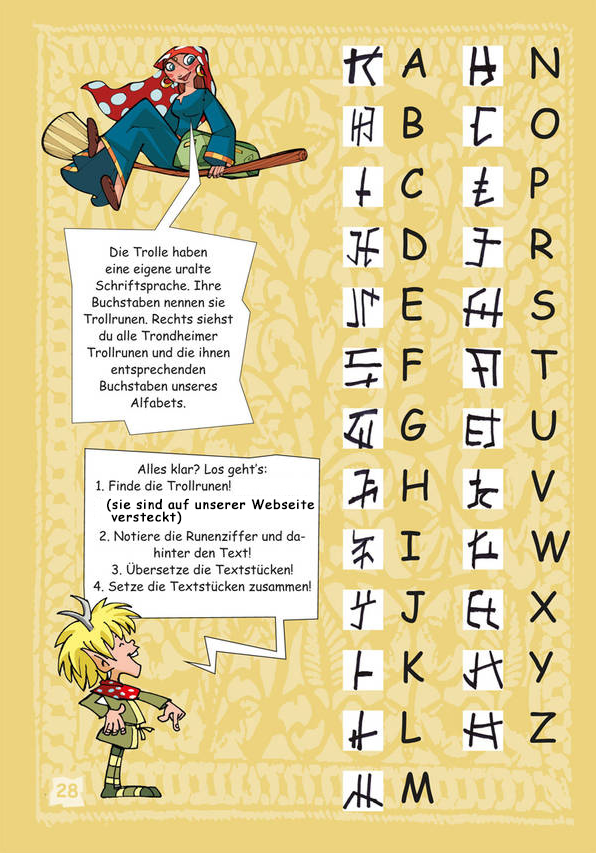 Finally it all becomes clear: the reason that neither I nor Google could understand the strange language is because it is apparently written by Trolls. We are told that Trolls have their own alphabet called “Troll Runes” but fortunately the residents of Turisede have made a handy translation guide for us. Now we can finally translate the sign to see what it says: 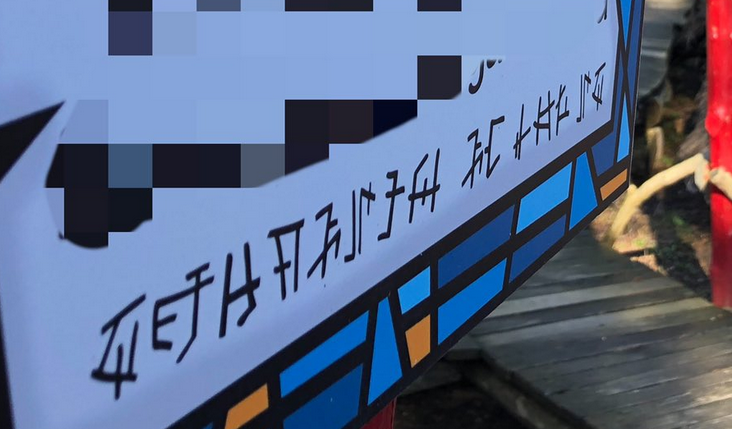 If you enjoyed reading this some of my other Quiztime solutions can be found here.