Easter Monday’s Quiztime challenge was from Julia Bayer. It was difficult but really quite addictive –  I spent more hours on this than I should have, but I got there in the end. This was the challenge: 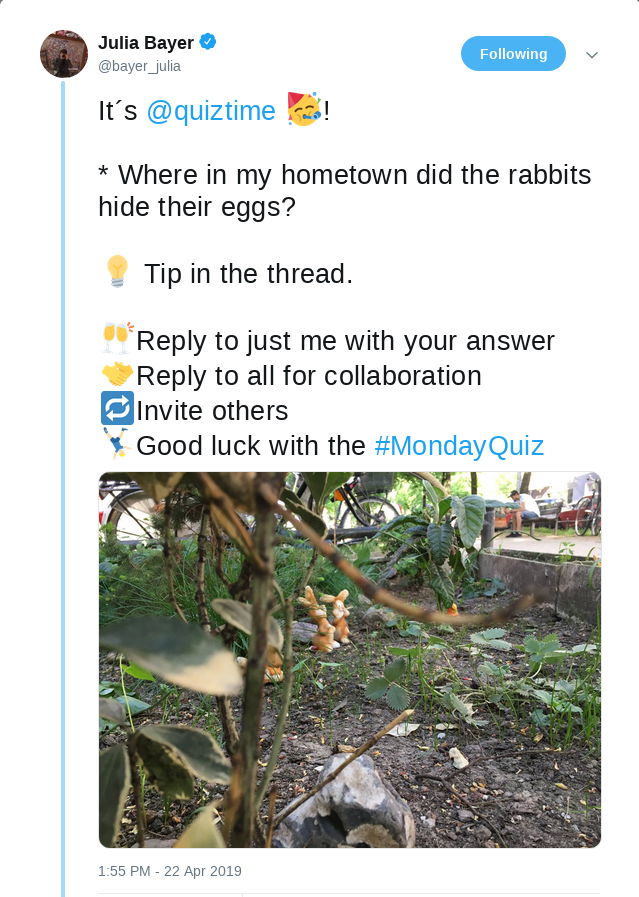 Julia gave one additional clue for this one. She said that “The place did not get the name because of Easter although it sounds like that.” This set me in the wrong direction. Julia’s website indicates that she lives in Köln so identifying the city was easy enough. I knew the German word for Easter is “Oster” so I tried dozens of search combinations involving Köln and Oster but I got nowhere. If i had widened my Easter vocabulary a little more I might have found the answer sooner but you can see why I didn’t at the end…

To try to make progress I went back to the basics – just look at the picture first and see what it shows!  On the right you can see a line of parked cars, with another parked blue car just visible on the left. The central path in the picture must be a cycle path with benches and plenty of tree cover.

I’ve never been to Köln so didn’t know which areas to focus on at first so I switched to Google Maps with the satellite photo layer enabled. Starting from the city centre and working outwards, the south-west corner of the inner city has several streets that feature tree-lined cycle paths like the one in the original image, specifically Sachsenring, Teutoberger Strasse, Rolandstrassse, Mainzer Strasse, and Volksgartenstrasse: 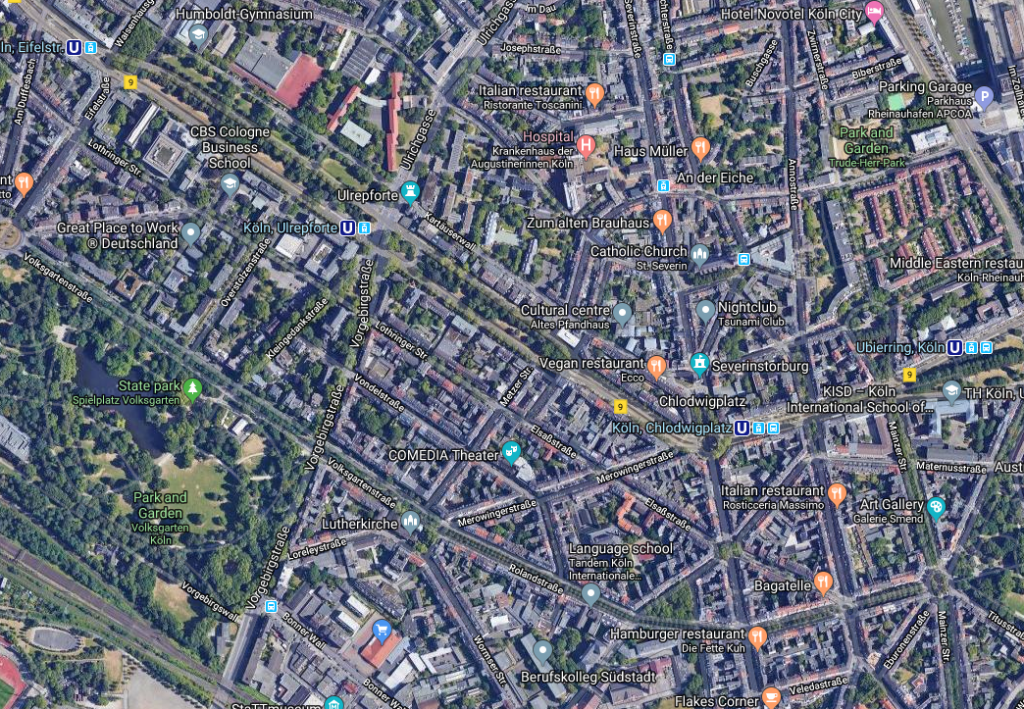 There’s a danger with all kinds of investigation of becoming too fixed on one part of an enquiry and forgetting the bigger picture.  With hindsight I made this mistake at this point and could have saved a lot of time but I didn’t know it at this stage.

To get a better view of each street, I switched to Google Street View for a closer look. Germany can be a hard country to conduct street view enquiries in because privacy laws there have greatly restricted the ability of Google to create new Street View images. The images from this part of Köln date from 2008, which is very old for verifying an image taken in 2019, but it’s the best available. I also tried Mapillary for this area but it wasn’t as helpful.

Street View didn’t quickly identify the location, but it did help to quickly eliminate the incorrect locations. Sachsenring had a line of trees, but no benches and tramlines instead of a cycle path so I discounted it as a location. Next I eliminated Mainzer Strasse:

Mainzer Strasse does have the central bike path and benches – but a crucial detail is missing. The original image features a number of low-level metal barriers to segregate the path from the grass and the road. These barriers are not present anywhere along Mainzer Strasse, so it can be eliminated as being the location in the original photo. The same rationale also means the western half of Volksgartenstrasse can be eliminated.

So where to next? I was trying to find the location of the three rabbits somewhere next to the bike path along Teutobergerstrasse, Rolandstrasse, and the eastern half of Volksgartenstrasse. I spent a long time using Street View to try and pinpoint the exact location and noticed that even though the three streets are all connected to each other, each one has its own distinct street furniture in the Street View images. This helped to confirm or negate whether the location in the original image.

Eastern Volksgartenstrasse does have benches and the same kind of low fence as in the target location, but the benches there are white, and not brown like in the photo, and so I discounted it:

Moving on a few hundred metres to Rolandstrasse and the street furniture changes again: 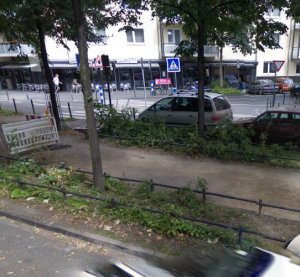 On Rolandstrasse there are no benches, and the fence style is different once more. The fences are double-layered and cordon off a small garden area beside the path. The small garden areas are for plants and not grass so I was hopeful this could be the correct location. However when I compared these with the fences in the original image location (highlighted in red) a difference emerged:

For additional verification we can compare the distinctive purple building in the background with a stock image from the same location: 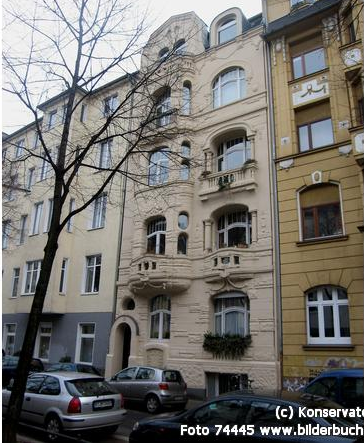 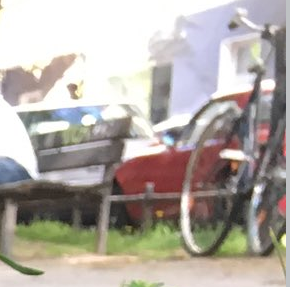 On the left is the purple-coloured building at the back of the original photo. This is number 42 Teutoburger Strasse, which can be seen more clearly on the left of this picture from Google Images (right).

It was at this point I discovered there was a much easier way I could have got this far with a little extra attention to detail at the start. As I said earlier – it’s too easy to get fixed on one thing and forget the bigger picture – literally in this case. I revisited the Google Map view of the location and noticed the following staring me in the face: 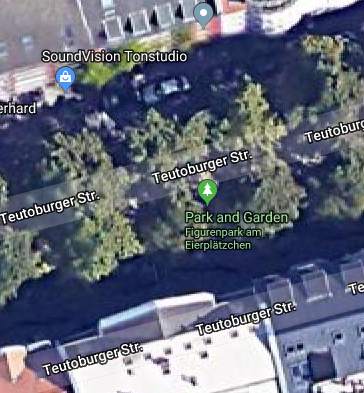 It says “Park and Garden – Figurenpark am Eierplätzchen”. This literally means “Figure Park at the Small-egg place”. Eier = eggs = Easter. I finally realised this was the clue Julia gave originally when she said that the location sounded like it was named after Easter. All my time wasted searching for “Oster”, “Osterhasen” and even “Osterkaninchen” (which I now know is bad German!) when the answer was staring me in the face all along. It’s easy to be wise after the event of course!

For final confirmation, I clicked on the link on the map and behold: 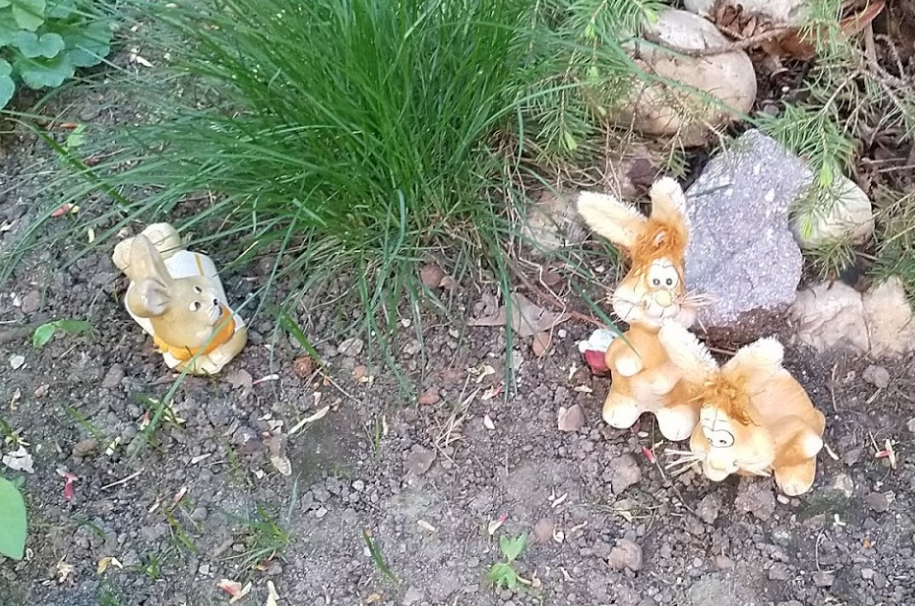 Finally we find a recent image (April 2019) with the rabbit figures at the correct location and from an independent source too. This was a really fun challenge from Julia but definitely a reminder that sometimes rushing to familiar tools like Street View can often make things more complicated than they need to be.