Recently I’ve discovered the excellent daily Twitter OSINT challenge Quiztime. Run by a group of OSINT and geolocation experts, Quiztime offers a daily puzzle where participants usually have to identify a location based on an image and then find out further information about the location. I’ve tried a few of the quizzes recently and they’re a lot of fun and a good way to brush up on photo geolocation skills.

Twitter is sometimes a bit limiting for giving detailed answers, so I’ve decided to post a few solutions I’ve come up with here on my blog to go into a bit more detail.

The quiz for 23rd April 2019 was posted by Marc Krueger. The question was: 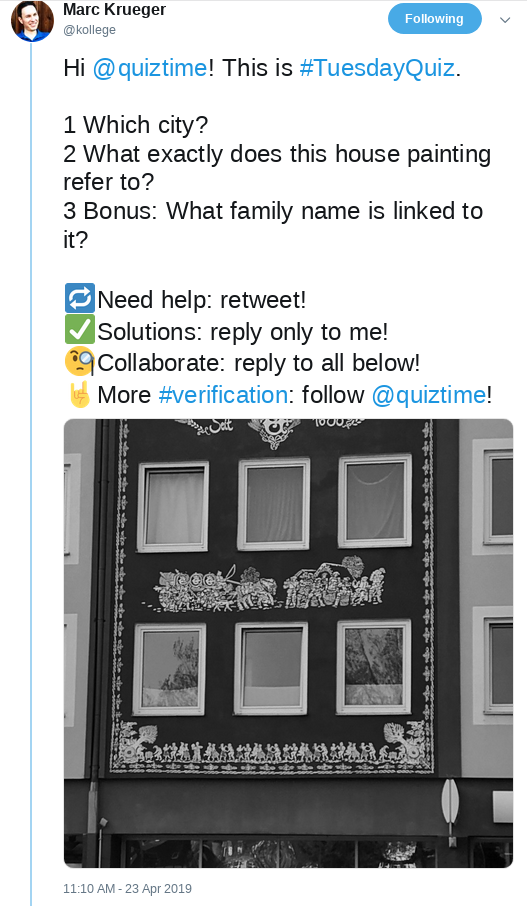 So to find the building, I used Google Reverse Image Search which surprisingly came up with a set of results that contained photos of the same building. I don’t usually expect much from Google Images, but I was pleasantly surprised this time. This result took me to an article that showed that the house was decorated as part of the Street Art Meile festival held in 2018. The site is of course from the local newspaper Einbeck News, which gives the answer to question one: Einbeck. Here’s what the house looks like with a fuller view: 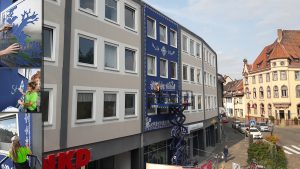 So on to question two. A simple Google search for Einbeck + “Street Art Meile Festival 2018” brings up this article about the specific work done on the house and an interview with the artist. The article is in German but I just about managed to read most of the article (and there’s always Google Translate if you get stuck). The interview gives the answer to question two: the painting shows farmers dancing and preparing beer – but just as important it is a way of commemorating the “Blaudruck” (blueprint) art style.

The last question was to identify which family name was associated with the address. I misunderstood the question at first and assumed that we had to find out who lived there now but I soon realised my mistake. This was certainly the hardest part.

To find the answer I tried various Google searches based on what I knew from the previous two questions (Einbeck, Art Meile 2018, Lange Bruecke 9-11, Blaudruck, “seit 1638”) alongside what I needed to know (“familie” – German for family). This brought back an unusual partially archived Google result:

It is enough to tell me that W A Wittram was a practitioner of Blaudruck in Einbeck since 1638. Given that “Seit 1638” is what appears on the house in the picture, it’s enough to give the answer to question three.

This was quite a hard but satisfying challenge. There is probably a faster and cleaner way to get the answer for question three by being able to search more effectively in German, but as most of the Quiztime team are German this is something I should hopefully learn more about!