The last post in this guide looked at how to install some useful OSINT programs for Linux directly from the internet. In this post I’ll show how to install some of the many popular Python-based OSINT tools that are available. It’s easy to feel intimidated by using the command line, but by the end of this guide it’ll be clear what pip, git, and Python are all about. Python is brilliant for carrying out a large number of repetitive tasks and sorting through data quickly. These tools can’t make your investigative decisions for you, but they can crawl the web and pull back data very quickly, certainly much faster than most browser-based tools will.

In this guide I’ll go through the installation of reconaissance tool theHarvester step-by-step from the absolute basics all the way through to launching it with a custom alias. Then I’ll explain how to install recon tools like Photon, Sublist3r, and Gasmask, username search tool Sherlock, scraping tools for Twitter (Twint) and Instagram (Instalooter),  phone number searcher PhoneInfoga, and password breach checker h8mail. It might seem like a lot now, but once you understand how these programs work, you’ll be cloning them from Github and using them for your research like there’s no tomorrow.

Getting Started With Installation – Basics

These programs don’t usually come with a nice shiny user interface like some of the programs you install from the Ubuntu Software Centre. This can make them seem complicated and installing them can cause a lot of frustration, but by the end of this guide you’ll know your Pip from your Git and be able to install a wide range of powerful OSINT tools. The guide is intended for people who are fairly new to Linux, so I’ll try and cover everything from the very beginning.

In the DIY-Buscador Ubuntu machine, open up the terminal by pressing Ctrl+Alt+T. You’ll see something like this:

If you’ve never used a terminal before, don’t worry! The computer doesn’t care whether the instructions came from a shiny GUI that you clicked on or whether you typed the command into the terminal directly. For example in this previous post I showed how to install Stegosuite by finding it in the Ubuntu Store, clicking on “install” and entering my admin password to give it permission to run.

In the terminal the exact same thing can be done by typing the following command:

sudo prompts me to enter my admin password and confirm that the program is authorised to run. Apt is simply the program that Ubuntu uses to manage software packages, so adding ‘install’ tells apt what I want it to do, and stegosuite tells apt which one of the thousands of available Ubuntu packages I want to install on my system. So it’s pretty obvious what this command would do:

And stegosuite would be uninstalled, just like that. Notice that if you try to use apt without sudo, Linux won’t let you. If you’re not authorised, you aren’t allowed to modify the software or any part of the operating system. (On some older tutorials you might see “apt-get” instead of “apt”, but they do the same thing.)

Using sudo apt install programname works well for programs that are listed in the Ubuntu repository – but none of the OSINT Python tools we want to install are listed there. They’re all available on GitHub, so to get them installed on the OSINT machine it’s necessary to use a program called git. A few of the tools can also be installed using another program called Pip, but I’ll get to that shortly.

Git is a complex tool used by developers for version control of their software, but for the purposes of this guide it’s only necessary to know that Git allows you to clone software directly from GitHub onto your computer.

In the console, check to see what version of git is installed in Ubuntu by entering the following command:

You’ll be told that git is not installed! It isn’t part of Ubuntu by default, so quickly add it into your OSINT build with:

Press Y when prompted and git will install in a few moments.

As of Ubuntu version 20.04, Python 2.7 is no longer installed in Ubuntu by default. The new default version is Python 3. To check this in the console type: 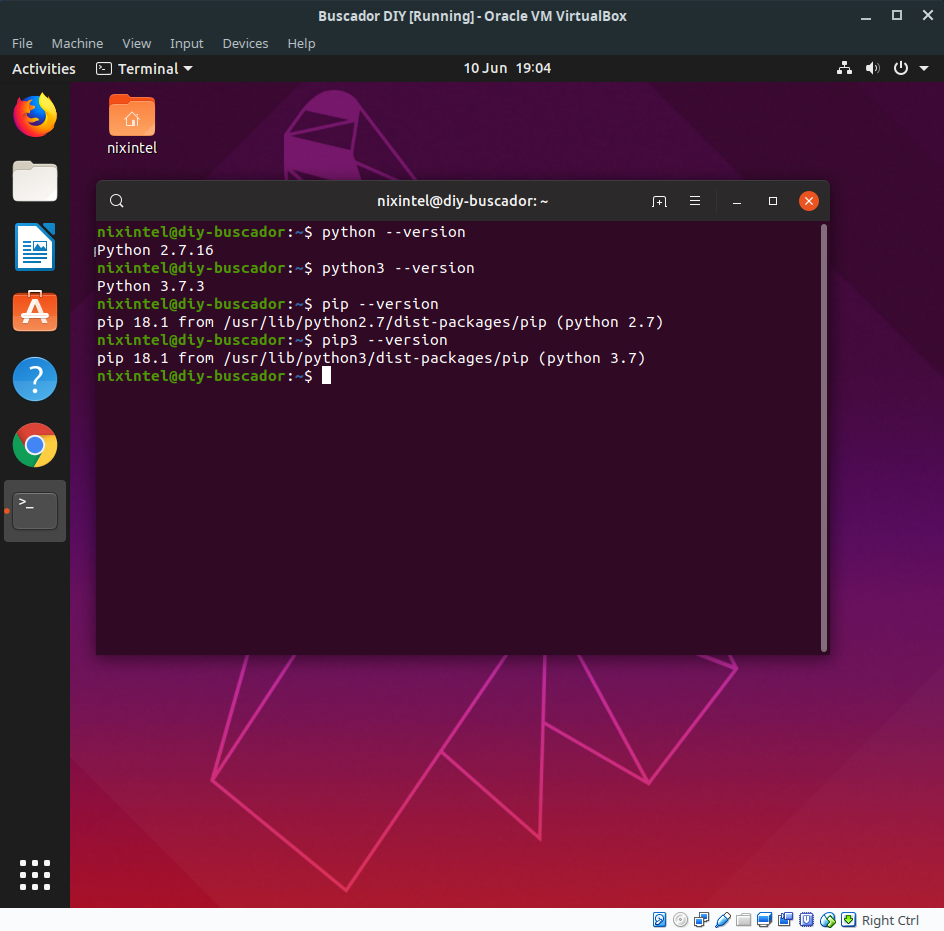 The other great thing about pip3 is that it allows you to install some Python programs with one simple command. This is much cleaner and easier than building software from GitHub. I’ll show how to install Twint this way later on.

So for best practice, use the following guidelines:

1. If you have the choice to use pip to install directly (e.g. as with h8mail or Twint), use pip.

3. If the program uses Python 3 (i.e. most of them) use python3 and pip3 in the console

4. Most tutorials often assume you’re running as root, i.e. with sudo and don’t explicitly mention it. In this build, it will always be necessary to put sudo in front of any pip or pip3 commands.

It’s always easier to learn by doing rather than just reading so I’m going to demonstrate how to install theHarvester. theHarvester is an established tool that is used to find out about a particular domain. It will pull back e-mail addresses, PGP keys, IP addresses and other information about the domain you’re investigating.

theHarvester Github page can be found here: https://github.com/laramies/theHarvester. This URL is important, so copy it from your browser’s navigation bar and keep it in the clipboard. Open the terminal with Ctrl + Alt + T and enter the following, you can just paste the URL you copied into the terminal with Ctrl+Shift+V (not just Ctrl+V like on the regular Desktop):

Now git is cloning all those files posted on GitHub directly to a folder in your home directory called theHarvester. Once git has finished cloning, move to that directory by typing

(note the terminal is case-sensitive) 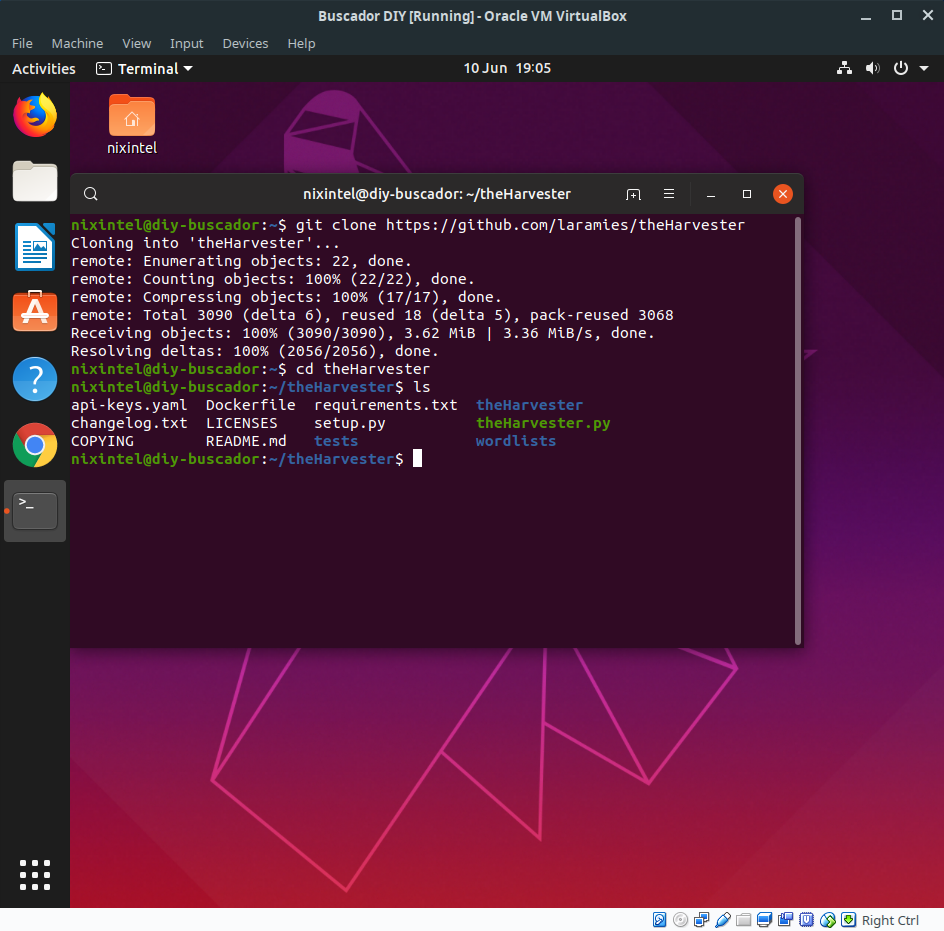 There’s a file in there called requirements.txt. Before we can run theHarvester, we need to install those Python library requirements with pip3. Enter the following in the console:

Pip will then install the extra software that is needed: 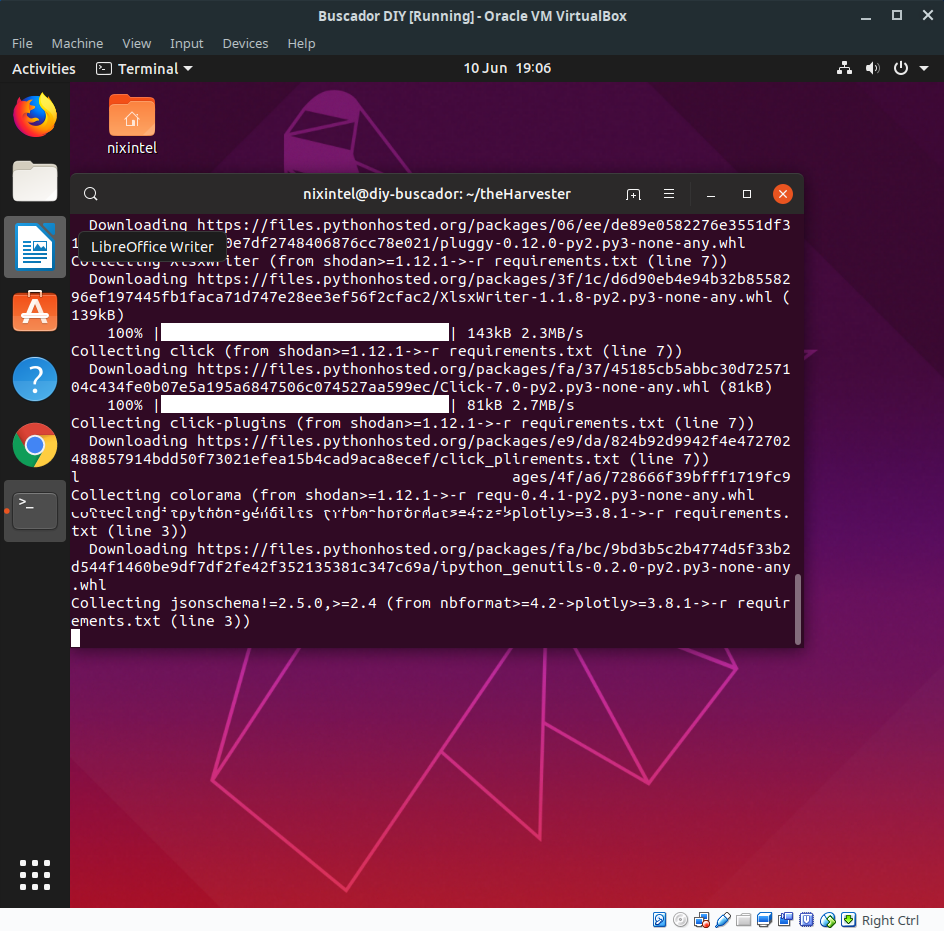 Notice if you’ve typed python and not python3 the program won’t run because it needs the newer version of Python. All this command is doing is telling python3 to run a script called theHarvester.py. The -h flag on the end tells the script to open the help guide for the program. If it’s working correctly you’ll see something like this:

It’s beyond the scope of this article to explain how to use theHarvester, but there’s a simple introduction here and in many other places on the web.

This completes the installation of theHarvester – but there’s an customisation we can make to our OSINT build setup that will make using theHarvester just a little smoother.

Typing “python3 ~/theHarvester/theHarvester.py” before you start every single query gets a bit tiresome. Fortunately in Linux it is easy to customise everyting and so it’s possible to create a shortcut, known as an alias. This can be done by editing the .bashrc file that controls all your terminal settings.

Open the terminal with Ctrl+Alt+T again and enter

Nano is just the terminal’s built-in text editor. This opens up the .bashrc file that needs to be edited. When it opens, scroll to the bottom and add the following lines:

Use Ctrl + X to exit, and Y when prompted to ask if you want to save the changes. Notice I made theharvester all lower case – it just makes typos less likely. 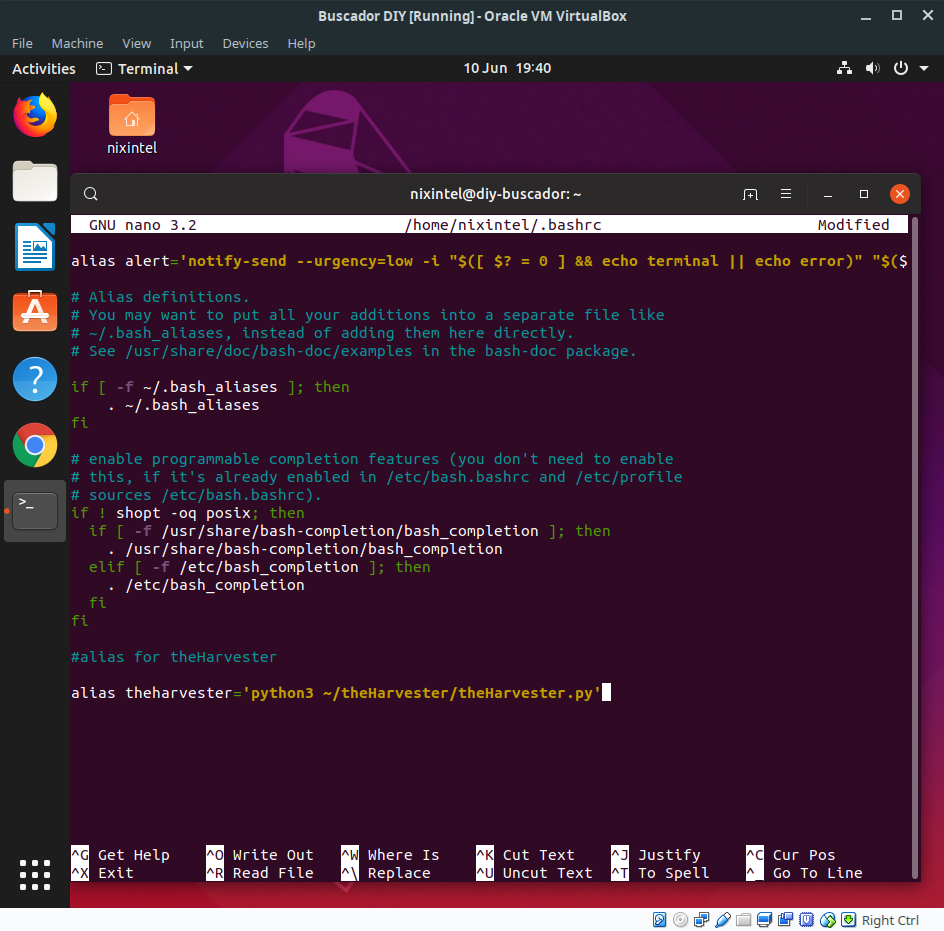 Now close the terminal, and then open a new one so the changes take effect. Now just type:

and theHarvester runs straight away. You can also run the command to launch queries directly e.g.

That’s the basic formula for installing Python programs from GitHub. In the remainder of this article I’ll explain how to install a program with pip.

Pip makes installing packages a lot easier, so for this example I’m going to show it can be used to install Twint. Twint is a really flexible Twitter scraper. It grabs all kinds of data from Twitter and exports it to a wide range of formats like csv or SQL. There’s a good introduction to Twint here.

The link to the Twint GitHub page is here.

Notice that unlike theHarvester, Twint can be installed with either Git or Pip, (or even by using a Python virtual environment, which is not within the scope of this guide). As per the rules of thumb I mentioned above, if given a choice between Git or Pip, always go with Pip. It’ll soon be clear just how much less complex this is.

In the terminal copy and paste the following:

Remember to preface the command with sudo or you’ll have trouble running it. Once it’s completed, simply type

And you’ll see the program has installed correctly! It isn’t even necessary to create an alias, because Pip did this automatically during the installation. Example usage would be:

This would scrape all the Tweets from my Twitter account and save them to a csv file for further analysis.

I’ve shown how to set up your custom OSINT machine for installing programs either with Git or directly with Pip. The rest of the guide will look at some other useful OSINT tools, what they do, the necessary commands to install them, and the entry needed in a .bashrc file to create an alias.

For the purposes of this article, I’ve installed all of these programs in my DIY-Buscador VM, so I’ll vouch for the fact that all of these methods currently work! 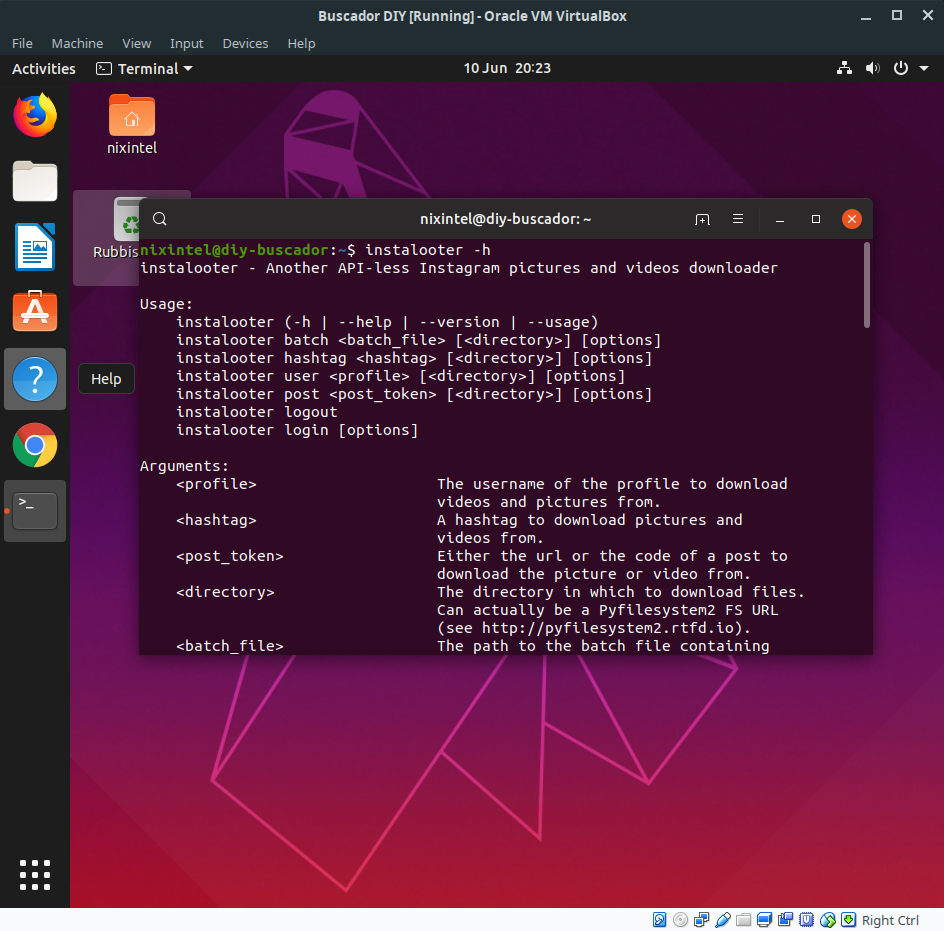 H8mail checks e-mail addresses to see if their credentials have ever bene found in a breach. The real power of h8mail comes with its ability to query a 45GB breach compilation. This is available separately. You’ll need a lot of extra space in your VM if you want to fit this in. 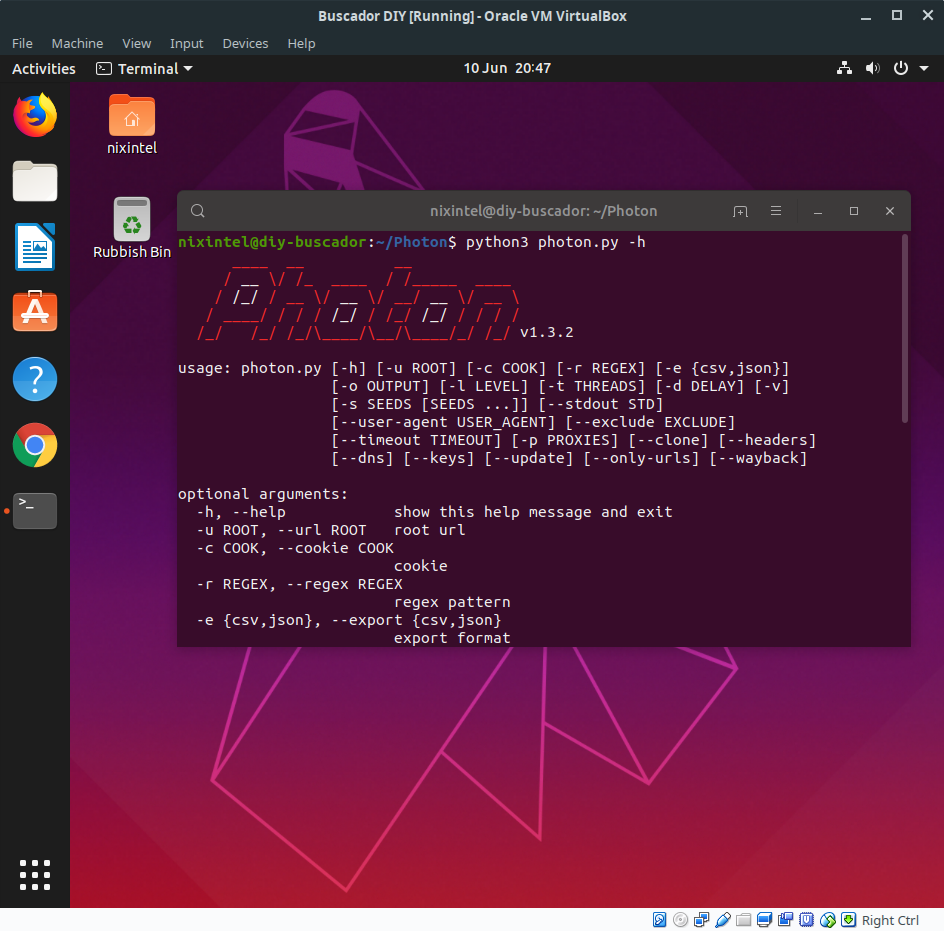 Photon is a fast OSINT crawler. Point it at a domain to recover associated e-mail addresses, DNS info, subdomains, social media accounts, and other information. 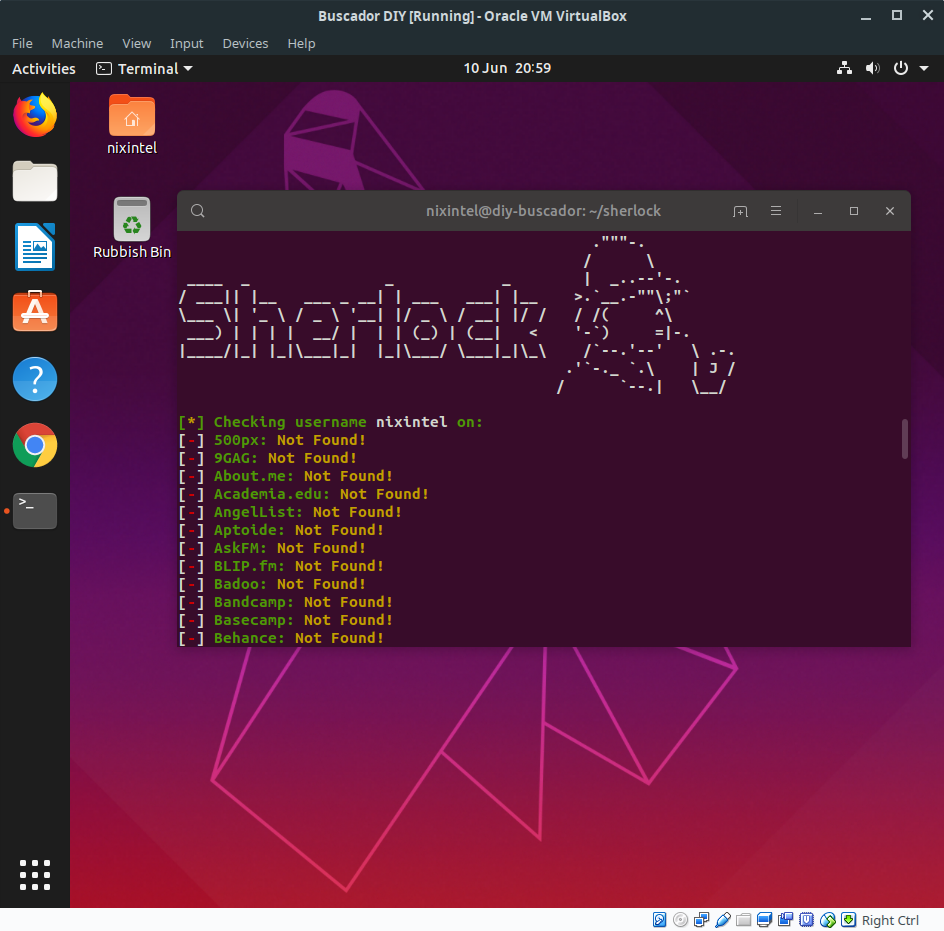 Sherlock is a fast username searcher. I previously wrote a usage guide and review here. 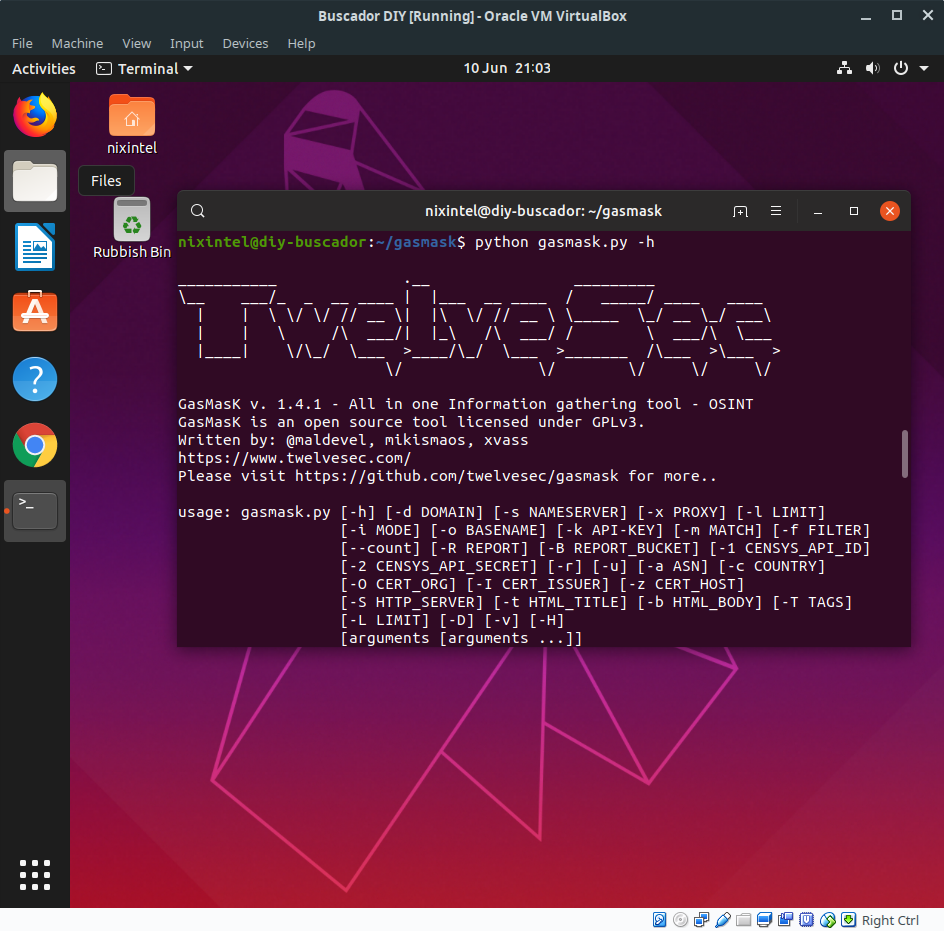 An auto reconnaissance tool similar to Photon or the Harvester. Note this program now runs with Python 3. 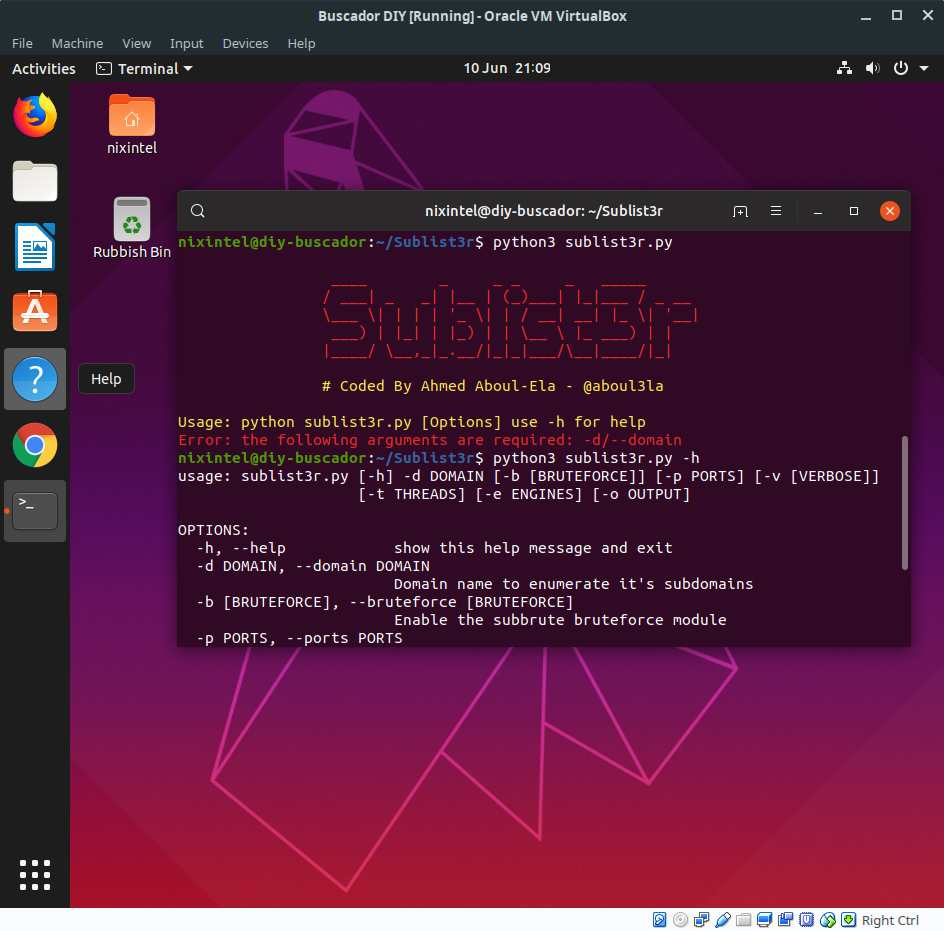 A tool for identifying subdomains by querying the data held by search engines. Can bruteforce if necessary.

(note I dropped the 3, I made too many typos)
Usage (with alias): 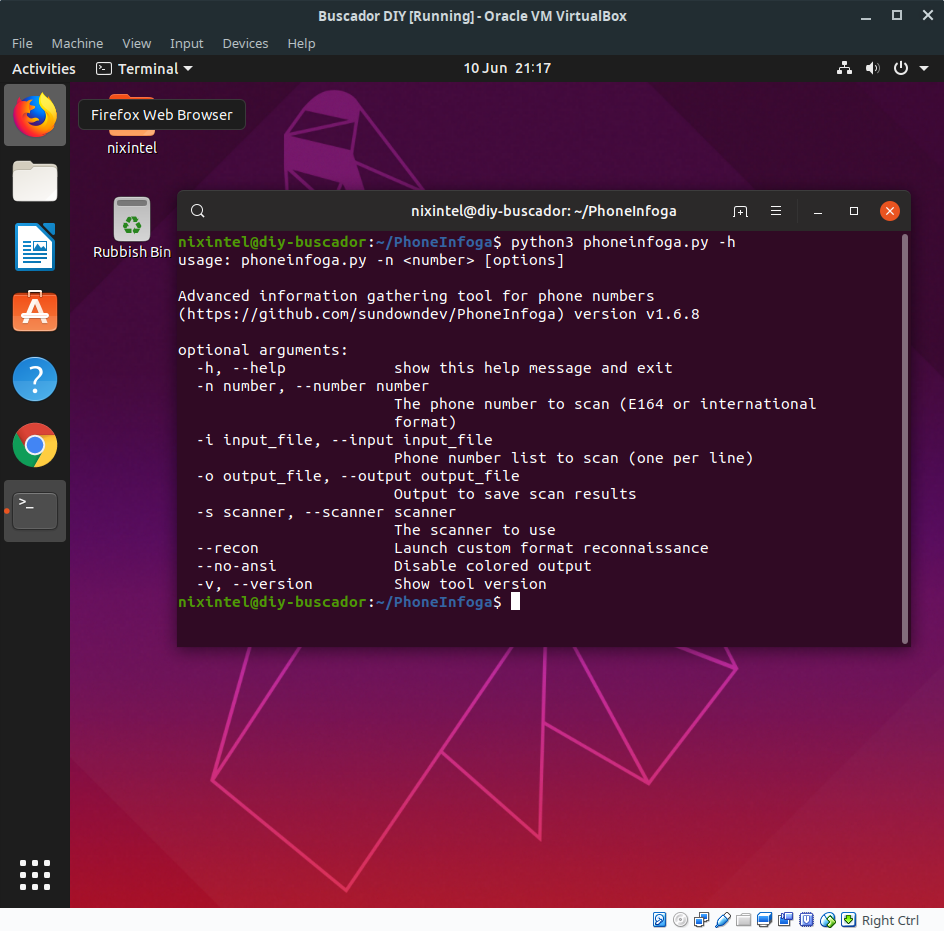 Crawls dozens of resources to conduct OSINT on a target phone number. Be sure to read the Wiki article on bypassing the Google Captcha before using it.

That concludes this part of the guide to building your own custom OSINT Linux machine. If you had little Linux experience before and managed to get these programs installed and working then kudos to you because the command line can be an unforgiving place but as you can see it can be used to do some really powerful things.

The same method can be used to install other GitHub based tools like Skiptracer, Knock, Cloudflair, and many others. A few of these tools benefit from the addition of API keys, but that’s really for a separate post. This guide and the ones before it should make it clear just how simple it can be to create your own custom OSINT VM.

In the next post I’ll explain how to clone and backup your OSINT VM in case it breaks, how to transfer it to another computer, and how you can hash it if needed. After that I’ll also suggest some useful OSINT addons for Firefox and Chrome.

Part 5 of this series can be found here.

8 thoughts on “Build Your Own Custom OSINT Machine – part 4”