Lars Wienand post challenges for Quiztime on Tuesdays. I’ve only tried a couple of his quizzes in the last few weeks but they were both fun to do. In this post I’m going to post my solutions for Lars’ quizzes from both May 14th and May 21st.

For this challenge Lars asks, where are these cyclists riding? 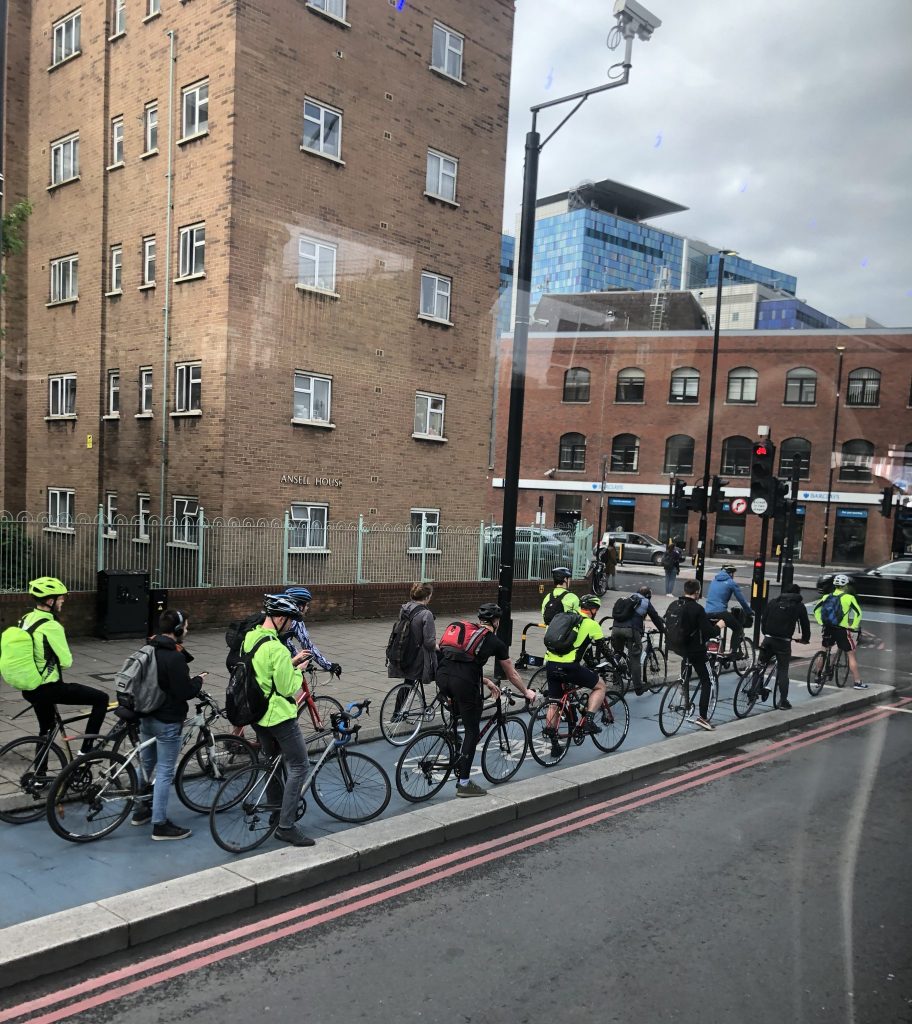 This was quite an accessible challenge because the photo is rich in details that hint where the location is. By just using observation without any tools there are plenty of clues as to where the cyclists are.

1. The cars and cyclists are both driving or riding on the left, which means that this is almost certainly in the UK or Ireland (although in theory there are other candidates).

2. There is writing on the block of flats that says “Ansell House”, which gives a specific address location to search for.

3. The biggest clue for me was the cycle path. You can see “CS2” written on the road, which confirms that this is Cycle Superhighway 2, so the location is definitely London.

Sticking with CS2, this map gives us nice and tidy parameters to hone in on the exact spot: 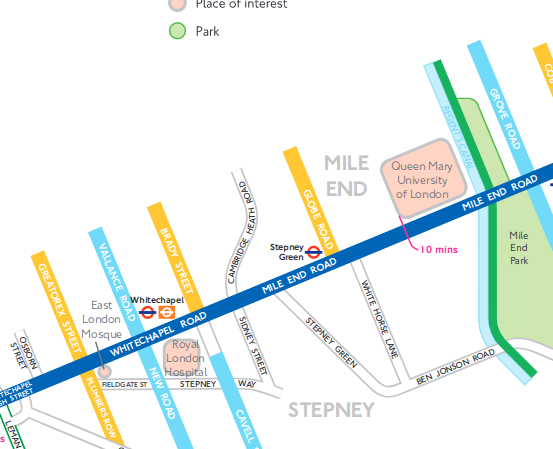 And then a quick check with Google Street View for a visual confirmation:

So the correct location was outside Ansell House on Mile End Road in London.

The second quiz was a bit more of a challenge. I think Lars’ trip to London had been to watch his beloved Eintracht Frankfurt play Chelsea in the Europa League, and there was another Eintracht Frankfurt theme in the quiz on 21st May. Lars asks: Where (as close as possible) and when did he take this picture? 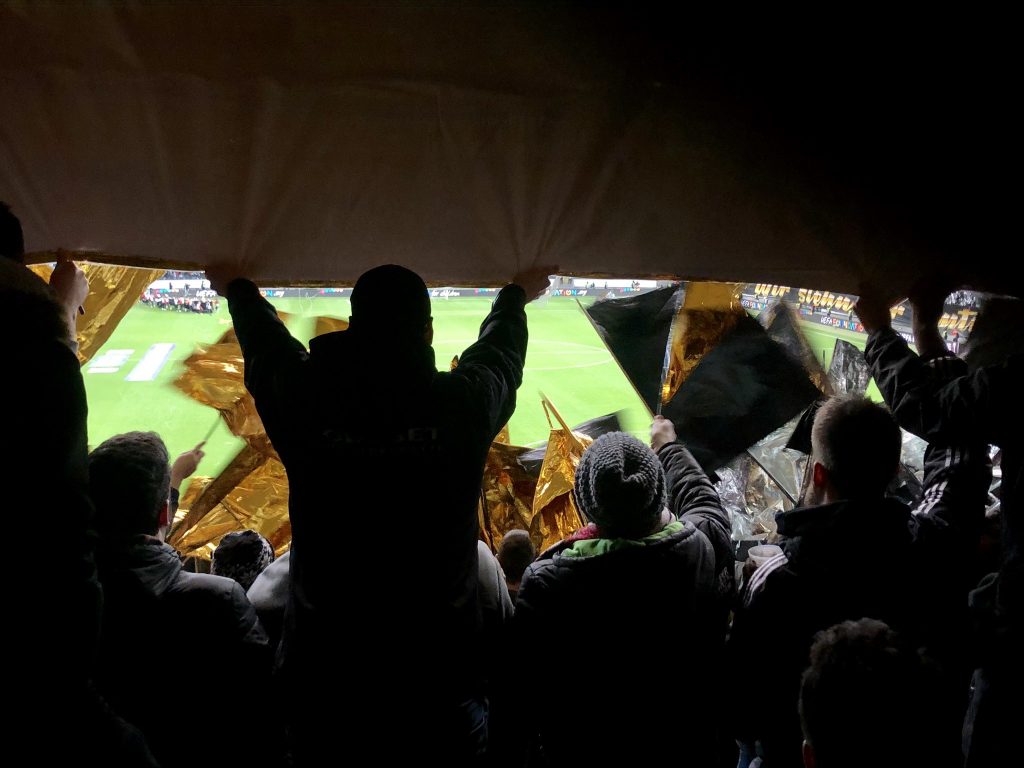 When was this taken?

After tweaking the image URL to get the largest possible version of the photo, there was one main clue to help start off. The adverts around the pitch say “UEFA Foundation”. This is significant because it drastically helps narrow down the time parameters. A quick look at the Eintracht Frankfurt fixture list shows that although Frankfurt usually play most of their matches in the Bundesliga, they have also been playing in the UEFA Europa League this season. Furthermore they played only 14 matches in the competition this season, and half of those were away fixtures (team on the left of a fixture list is always the home team). This means that we can already narrow down the possible occasions to just 7 matches.

(I didn’t know at the time but this was a bit of luck – the advertising hoardings are electronic and always change advert every few minutes. If they’d hadn’t been showing the UEFA advert when Lars took the picture, this challenge might have taken longer.)

The teams were not yet out on the pitch, so unfortunately it is not just a matter of looking at the team strips to see who Frankfurt were playing. The people on the top left walking onto the pitch are not the players either, as will become clear.

There are also some other distinctive features to consider:

1. The gold and black flags in the crowd.

2. The banner to the right which says “wir stehen…”

3. The objects on the pitch to the left, probably some kind of banner or sign.

I decided to work backwards from Frankfurt’s most recent UEFA fixture until I could find details that could help pinpoint exactly when this game was played. Unlike some photo challenges where it is almost impossible to find corroborating photos of a location, this challenge had the opposite problem that there were almost too many and finding the right images for verifying the exact time was hard.

Just for a change I decided to make use of the large amount of press coverage and work with YouTube videos rather than photos at first.

So this was the first fixture I checked , Frankfurt v Chelsea, 2/5/19:


Lots of footage of the stadium before kick-off which is really useful. But there’s no sign of any gold and black flags, or the “wir stehen…” banner. So let’s try the match before, which was Eintracht Frankfurt v Benfica on 18/4/19:
There are lots of flags to be seen once again, but no gold ones. I couldn’t see the “wir stehen” banner either. Admittedly this footage is only a few seconds long and is not 100% conclusive, but before completely discounting it I carried on and checked the previous UEFA match when Frankfurt played Inter Milan. I only needed to watch the first five seconds to know this was the right one:

You might have to watch a few times, but everything in Lars’ photo is there at the beginning of the television footage, just a few moments after he took his picture. The gold and black flags, the “Wir stehen…” banner and the banners on the ground at the edge of the pitch are all present. This also shows that the people walking onto the pitch in Lars’ photo are not the players, but the mascots who carry the large UEFA banner onto the centre circle.

This also helps pinpoint the time. Looking again at the fixture list, the kick-off was at 18:55 on 7th March 2019. This must mean that Lars’ picture was taken just before the kick-off, probably between 18:45-18:50 or so.

Now I was sure I had identified the correct game, I did some image searching to try and verify what I’d found in the videos. The official UEFA match report gave this great photo which covered everything:

So having found the correct time to within a few minutes, it was now just a question of finding exactly where Lars was in the stadium. In the original photo we can see he is at the end with the gold and black flags. The official UEFA photo (above) shows red and black flags (or no flags) at the other end of the ground, so he can’t be there.

He is also underneath the bottom edge of a larger banner, with flag wavers in front of him, so my first suggestion for his exact location was here: 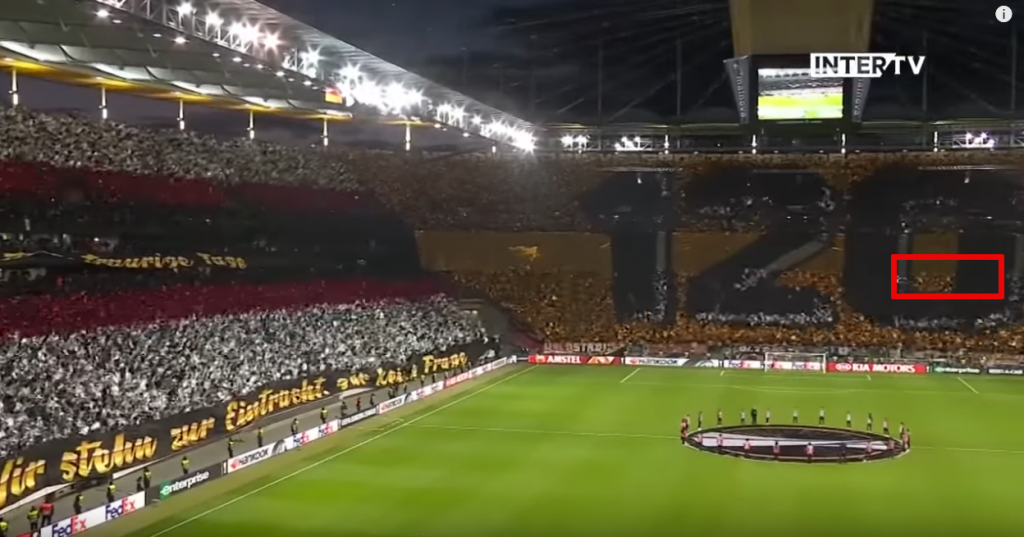 You can see it is at the correct end of the stand (to the right on this picture, or to the left on the original photo) and at about the right height, where the large banner joins the flag wavers, but I wasn’t exactly on the right spot. I was too close to the centre of the stand and Lars was further out to the edge. Time to consult the official seating plan: 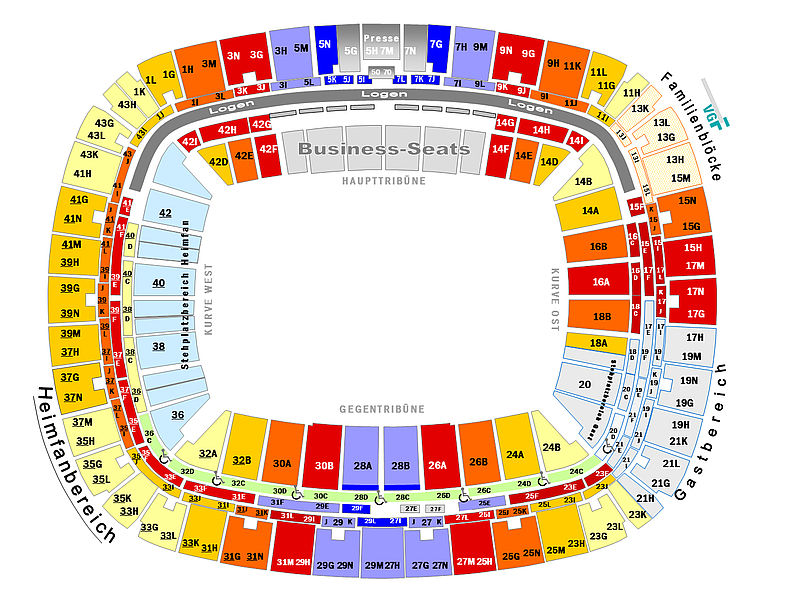 Even though the stadium is symmetrical in design we can get the orientation by noticing that the Heimfanbereich (home fan area) is at the opposite end to the Gastfanberiech (away fan area). We know Lars is a home fan so he will be somewhere on the left side of the seating plan. By comparing all the photos to the stadium plan it looks like Lars was sat in either section 41K, 41F, or 40D. These sections were my answer for the “exact” location and Lars confirmed that he was sat in section 40D.